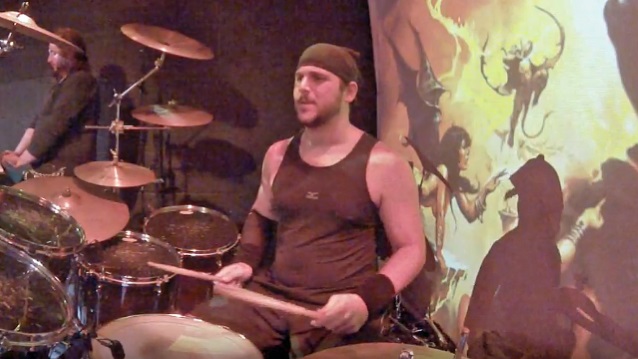 Brazilian-born drummer Marcus Castellani made his live debut with MANOWAR last night (Wednesday, November 15) in Norrköpping, Sweden. He joined the band as the replacement for original MANOWAR drummer Donnie Hamzik, who returned to the group in 2010.

Castellani, who previously played in the Brazilian MANOWAR tribute band KINGS OF STEEL, said: "I grew up listening to the iconic bands that made metal as we know it today — and of course MANOWAR was one of them. Scott Columbus has been my greatest inspiration; the unique power in his playing and his massive sound were amazing — but, more importantly, he taught me that emotion and the right feeling are equally important components to make a drummer truly outstanding."

MANOWAR's "The Final Battle" world tour 2017 will continue with four more performances in Sweden and Norway before heading to Germany, where the band will kick off with two nights in Munich.

MANOWAR singer Eric Adams, whose real name is Lou Marullo, spoke about the group's's final trek in a recent interview with "Outdoor Adventures With Jayson". He said: "This is it. We've got one last tour coming up. As far as I know, it starts in November in Scandinavia. And then we head down to Germany in December. I fly home for Christmas around December 18, somewhere in there. And then I don't know where we go after that. But it will continue for a little while after that; I just don't know where yet. So I'm looking forward to that."

The 63-year-old singer admitted that it was "kind of a Catch-22 thing" knowing that he would never perform with MANOWAR again. "I'm gonna miss the big stage — of course I am — but all good things have to come to an end at some point," he said.

Eric, who describes himself as "a big-time bow hunter," has been a hunting-safety instructor for the state of New York where he teaches new hunters about the game laws in New York. He is also the hunting editor for Texas Fish & Game magazine.