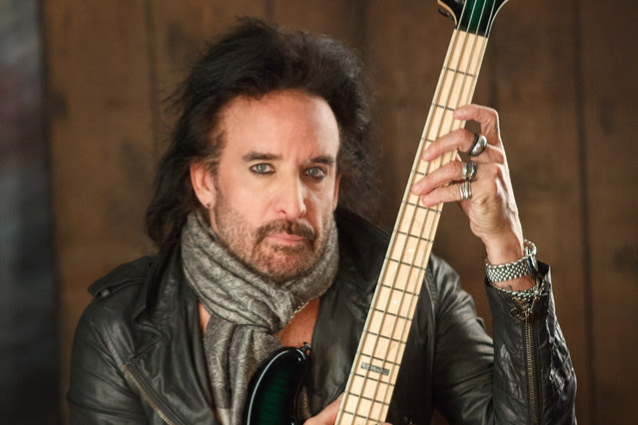 Marco Mendoza says that he is "confident" the new lineup of THE DEAD DAISIES will "come up with some great stuff."

THE DEAD DAISIES — Lowy, Hughes, guitarist Doug Aldrich (WHITESNAKE, DIO) and drummer Deen Castronovo (JOURNEY, BAD ENGLISH) — recently recorded "Righteous Days" and an undisclosed number of other songs at Los Angeles's Sunset Sound recording studio for a new album expected to be released in 2020. It will serve as the follow-up to the group's fourth full-length release, 2018's "Burn It Down".

During an appearance on the latest episode of "The Classic Metal Show", Marco spoke for the first time about the circumstances that led to his exit from THE DEAD DAISIES and the addition of Hughes.

Mendoza said (hear audio below): "I was fortunate enough to meet David Lowy and to work with David Edwards Management from the beginning. I think they had one show with THE DEAD DAISIES with another bass player in Australia, and then I got approached. I was touring and I got approached to be part of it. And I heard it and I was, like, 'Wow! I really need to be part of this.' So I've been there from the beginning. And I've been part of the roller-coaster ride, and it's been a roller-coaster ride. And it's been a lot of work, a lot of blood, sweat and tears, a lot of elbow grease coming from every side, including financially. To make something like that happen, that big, you've gotta have the gas, the gasoline, the fuel for the engine.

"There's no way to explain it in five minutes, the dynamics that happen, in every possible way," he continued. "There is a business side; there's personalities; there's issues with… you have the point cat that has the vision, the bigger vision. In any band, there's always one, two, three people that are guiding the ship, the boat.

"In the camp, we felt like we had reached a plateau," Marco added. "We toured solid last year and it was our fifth album, or whatever. And we saturated the market available to us. We were having a blast, and we became a family, and everything that comes with it — the arguments and people bumping their heads and the egos and people getting hurt and all that. It's a family. And then you get over all that and then you get up on stage and it's all about the common denominator — put on the best show possible and record the best songs in the business, if possible.

"At the end of the day, there's a bottom line, and I think we had reached every possible level that we could reach with that lineup. And the work ethic needed to continue was heavy, man — really heavy. Physically, we're not young cats, and you can only go so far. And it was very demanding where we needed to go. Had we been in our 30s or 20s, we could probably have more energy. But anyway, it got to the point where people neeed to make changes and bailed, and that created that gap. You have the engine and one of the pistons goes. So you take a few steps back and you start looking at this year, which is '19. 'Where are we gonna go? Where are we going? What are we doing?' John had made the decision to move on. And it was mutual, it was amicable — everybody was cool; it's what it is. So we had to take a few steps back and look at, 'Okay, so now, what are we gonna do?' There was some opportunities to approach a couple of situations with singers and people that would take that spot, and it didn't work — at least where we felt it [needed to] go. In March or April, I get the call that there's an opportunity to work with Glenn Hughes. And I'm a friend of Glenn's, and I'm a big fan of Glenn's. I have the utmost respect for that cat, man. He's a sober friend of mine, and I'm a fan of his singing. As a human being, he's always been absolutely a great guy with me. And so the opportunity came up, and I had to be realistic about the situation and go, 'What would be best for the project to move forward?' And I agreed, 'This is a good move.' So I'm gonna take my nuts [laughs], I'm gonna take my bow and walk away and open the spot for Glenn to come in and sing and play [bass]."

According to Marco, the addition of Hughes — who has remained active in a myriad of bands and as a solo artist since he left DEEP PURPLE in 1976 — will help expose THE DEAD DAISIES to a whole new audience.

"I believe that they're gonna come up with some great stuff and they're gonna take this to the next level — absolutely," he said. "There's gonna be doors opening up that wouldn't open [before] for us — whatever the reason. I think people are gonna be curious. I'm curious. I already heard some of the stuff — I heard some stuff that's killer.

"So, it is what it is," he concluded. "And I think a lot of fans are waiting to see what's gonna go down. And I'm absolutely positive it's gonna be a good move, and it's headed in the right direction, and it's gonna continue the legacy of THE DEAD DAISIES, the journey of THE DEAD DAISIES… So I'm very confident they're gonna throw down and come up with some cool stuff."

Known as the "voice of rock," the 68-year-old Hughes is best known for fronting the Mk. III and Mk. IV lineups of DEEP PURPLE in the mid-1970s and for singing on BLACK SABBATH's 1986 album "Seventh Star". He was replaced by Ray Gillen after only six live performances with the band.