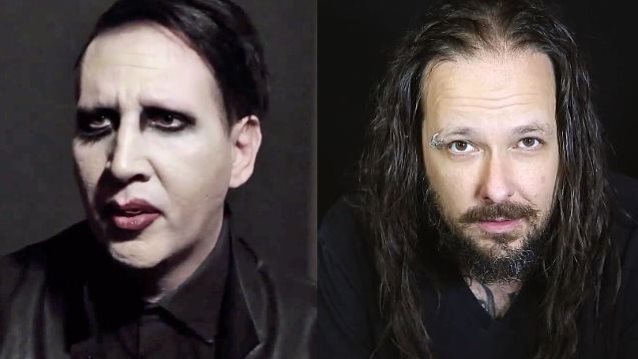 According to The Pulse Of Radio, Marilyn Manson says he's working on "Southern-sounding" acoustic blues material — and that it will feature KORN's Jonathan Davis. Speaking in a Reddit session with fans, Manson revealed that a "completely unexpected" project he hinted at earlier this month was an unplugged record, explaining, "That's some of the plans of the style of music that I'm working on right now. I don't know what it'll turn into. Some of it will be with Jonathan Davis, I think, because he has plans of doing something similar — something that might even cross over the boundaries of being more Southern-sounding."

Manson added, "I did record [1995 EP] 'Smells Like Children' in Mississippi, which is where the blues came from, so there might be something more acoustic and blues in my future. I like the rawness of it."

Davis recently posted a photo on Instagram showing him working in the studio with country duo BIG & RICH on what was dubbed a "country music project."

Manson and Davis last joined forces in 2002 on a song called "Redeemer" for the soundtrack of the movie "Queen Of The Damned".

The shock rocker also recently said he was working on music with actor Johnny Depp, and added that he wouldn't be surprised if he and SMASHING PUMPKINS frontman Billy Corgan collaborated in the studio as well after their upcoming summer tour together.

The MANSON/PUMPKINS "End Of Times" tour begins on July 7 in Concord, California.