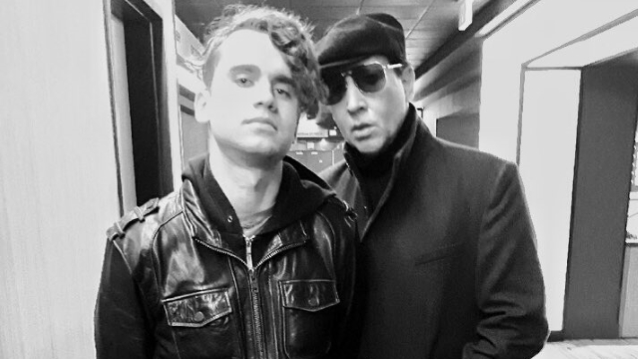 Marilyn Manson has confirmed that he has recruited Brandon Pertzborn to play drums for his namesake band.

The Texas-based Pertzborn, who is apparently only 24, has toured with a number of different artists over the years, including BLACK FLAG, DOYLE and HO99O9, the latter of which opened for MARILYN MANSON last fall.

Earlier today, Manson tweeted out a photo of him with Brandon, along with the caption: "Me and my drummer Brandon Pertzborn"

In May 2018, Brandon played with SUICIDAL TENDENCIES, filling in for Dave Lombardo, when they opened the MISFITS reunion show in Newark, New Jersey.

Drummer Gil Sharone announced his departure from MARILYN MANSON in March, explaining in a statement that it was "time" for him "to pursue other current and future projects."

The Los Angeles native joined Manson's band in 2013 and was featured on the shock rocker's last two records, "The Pale Emperor" and "Heaven Upside Down".

Marilyn Manson and Rob Zombie will embark on the 2019 leg of their notorious "Twins Of Evil" tour this summer. Produced by Live Nation, the co-headlining North American summer trek, which is subtitled "Hell Never Dies Tour 2019", kicks off in Baltimore, Maryland on July 9 and makes stops at Rock USA in Oshkosh, Wisconisin and Rock Fest in Cadott, Wisconsin.