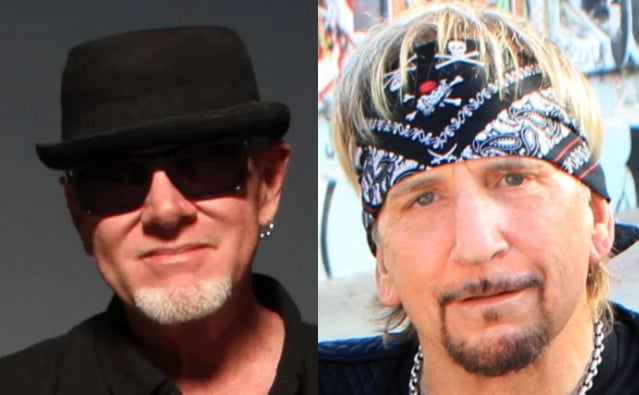 MARK KENDALL On Why GREAT WHITE Won't Bring JACK RUSSELL Back: 'I Can't Have Him Sitting On A Stool Onstage'

This past May, GREAT WHITE announced that it had parted ways with singer Mitch Malloy and had replaced him with Andrew Freeman (LAST IN LINE). Malloy had been in GREAT WHITE for nearly four years, having joined the group in 2018 following the departure of Terry Ilous. Asked in a new interview with Metal Edge if he and his bandmates ever considered the possibility of bringing original GREAT WHITE singer Jack Russell back into the fold before getting Andrew, GREAT WHITE guitarist Mark Kendall said: "No, only because he is not 100%. He sits on a stool when he plays and I'd rather just remember him in his heyday when he was flying around on the stage and singing like a bird. I can't have him sitting on the stool onstage; it's not the kind of show I want to present. If we were playing acoustics and were all sitting on stools, that would be a different story."

Kendall also addressed the fact that Jack is continuing to play shows with a band called JACK RUSSELL'S GREAT WHITE, which features Russell alongside Robby Lochner (FIGHT) on guitar, Dan McNay on bass, Tony Montana on guitar and Dicki Fliszar on drums. Asked if it bothers him that there are two versions of GREAT WHITE out there touring, Kendall said: "Not too much, because they [JACK RUSSELL'S GREAT WHITE] don't play that often as it's just a way for him to make a living. I didn't want Jack to just call his band JACK RUSSELL; I wanted people to know what they were going to see when they went to a show, and because the guy has his surname attached to GREAT WHITE, this way they know it's Jack Russell, the past singer from the band GREAT WHITE. Whereas this band is not like MARK KENDALL'S GREAT WHITE — it's just GREAT WHITE only. We just wanted him to be able to make a living and that was the settlement we made."

Russell sued his onetime bandmates in 2012 over their continued use of the GREAT WHITE name after Jack had taken a leave of absence from the band for medical reasons. A short time later, Russell was countersued by Kendall, Lardie and Desbrow, claiming the vocalist's self-destructive behavior was damaging the GREAT WHITE name (they also alleged he was charging promoters less for his own touring version of GREAT WHITE). The parties settled in July 2013 without going to trial, with Russell now performing as JACK RUSSELL'S GREAT WHITE while the others are continuing as GREAT WHITE.

In an April 2021 chat with The Rock Experience With Mike Brunn, Russell was asked if he can envision a day when he would perform with Kendall again. He responded: "No. Not at all. Every time Mark gets a chance, he goes out there and says horrible things about me, and then he closes it with, 'But I love the guy, man, and I wish him all the best.' I'm just, like, really, dude? You're gonna sit there and burn on me for an hour and talk about what a big drug addict and alcoholic I was. You forget how bad you were, and I put up with it.

"People that become born again, sometimes I find that they become the most judgmental people there are," he continued. "And I'm not saying everybody — that's not true for everyone — but him in particular.

"Don't get me wrong — if Mark called me right now, I'd love to have a wonderful chat with him and talk about the old days. I have no interest in playing with him. And he doesn't think I can handle it anyway. But it's funny — I can go out and play with my own band.

"They just take potshots at me whenever they can," Jack added. "I think it's for the press. Any interview he does, you'll see it on Blabbermouth: 'Mark Kendall says he will never play with Jack Russell again.' It's, like, you've said that 38 times. Can you come up with something different? 'Jack Russell's head falls off' or something. You know what I mean? It upsets me in a way, but then it's also a laugh.

"I'm not gonna go out there and beat him up and pull the covers off him. That's personal stuff. I'll leave it in the closet where it belongs."