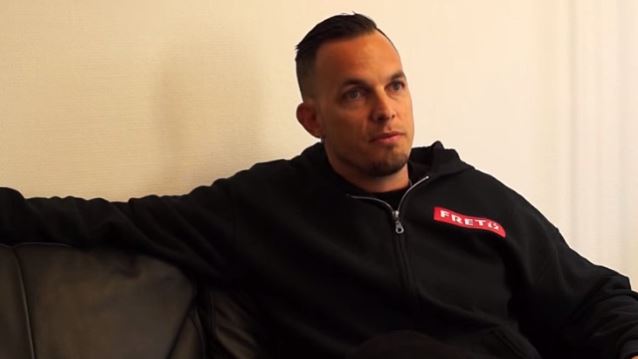 Army Of 12 Germany recently spoke to CREED and ALTER BRIDGE guitarist Mark Tremonti about "Cauterize", the second album from his TREMONTI band. You can now watch the chat below.

Asked how "Cauterize" is different from 2012's "All I Was", Mark said: "The difference between 'All I Was' and this is I think on 'All I Was', we knew we were… We just kind of went into it hoping for the best, and now that we know what we can do, we kind of took our sound and expanded it. And we had Wolfgang [Van Halen] on the bass [on 'Cauterize'], which made the rhythm section tighter and more syncopated."

Mark also spoke about "Another Heart", the first single from "Cauterize". He said: "I was kind of on the fence with it at first. I get why everybody chose it as the first single. I wanted 'Flying Monkeys' to be the first single, 'cause I thought it was the most… It's my favorite song. It's [got] one of my favorite riffs, one of my favorite choruses. But then everybody's, like, 'Ah, the chorus just isn't a radio chorus.' [And I'm, like], 'Yeah, it is. C'mon!' But I get why 'Another Heart'… 'Another Heart' has the catchier chorus. I love the bridge in 'Another Heart' and I love it as a song, so looking back on it, I think we made the right choice. Does it represent the album as a whole? It fits on the album. But definitely not every song is like that; most of the stuff may be leaning a little heavier than that song, but I like it."

Tremonti told The Pulse Of Radio that "Cauterize" is not the only disc he has coming out in the near future. "We put together two albums," he said. "We have this album that's [coming] out, but in the same recording session we recorded another album called 'Dust'. That's gonna be coming out who knows when, but probably within a year. So I want people to know that that record is part two of this record. It's not necessarily record three, it's just the second disc of this album. So there's two 10-song albums."

Asked about TREMONTI's decision to release two full-length albums that were recorded during the "Cauterize" sessions, Mark said: "At first I just wanted to record as many songs as possible. We were thinking about maybe putting out twelve songs on the record and then releasing [another] eight songs once a month or something for the remainder of the year. But when I stepped back and listened to it, I was, like, 'You know what?! Let's make two records.' So I left some of my favorite songs on the second record, just so people aren't gonna buy the first record and then go, 'Okay, this is the good record and this is the bad one. These are the bad songs.' My brother Dan likes the second record better than the first record. Some of my favorite songs are on the second record. The title track, 'Dust', I think, has the best chorus of the whole recording process. 'Dust' has my favorite solo. The opening track, 'My Last Mistake', is one of my favorite songs. It's got the big ballad of the two records. It's definitely not the 'b-sides' of this album."

It was announced in March that Wolfgang Van Halen would not hit the road with TREMONTI due to commitments with his main act, VAN HALEN.