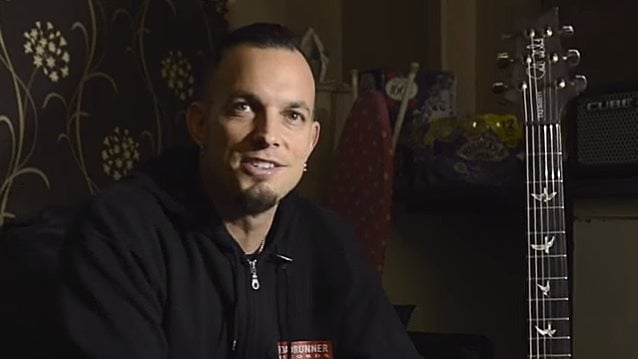 U.K.'s Total Guitar magazine has uploaded a special edition of its "Me And My Guitar" video segment, featuring Mark Tremonti (ALTER BRIDGE, TREMONTI) showing two unique PRS models he is currently roadtesting; the Mark Tremonti Concept guitar he helped to design that has been the subject of much debate online, plus a special Hybrid Baritone version of his signature model.

ALTER BRIDGE has commenced work on its fifth studio album, which will follow up 2013's "Fortress". The yet-to-be-titled disc is expected out this fall, but the band is already kicking off the start of the new album cycle by offering fans a chance for the first time to get their hands on a range of ALTER BRIDGE memorabilia, merchandise and experiences.

Some of the goodies on offer include lifetime VIP status, special meet-and-greets at soundcheck, having your name included in the new album liner notes, access to signed and limited edition bundles, drumsticks, guitars, used strings, handwritten lyric sheets, framed and signed album artwork, used guitar strings and drum heads and access to an exclusive listening party and performance by the band.

Tremonti said: "We are happy to be able to offer our fans a few of the things they have asked us for in the past. As a band, we also tried to come up with a few unique items which I feel are the ultimate collector's items!"

Regarding the sound of the new album, Tremonti recently told TeamRock, "It could go in any direction. I've got a ton of ideas in all different styles. Last time, it was just one heavy idea after another and hopefully this time we can branch out and bring something new to the table."

Mark Tremonti will release the third effort from his band TREMONTI, titled "Dust", in April.