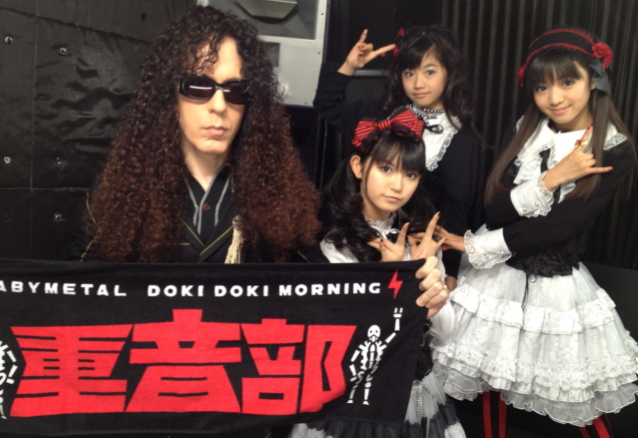 In a new interview with Vikram Chandrasekar of Tales From The Road, former MEGADETH guitarist Marty Friedman, who has been living and recording music in Japan since 2003, was asked about BABYMETAL's unstereotypically "happy" lyrics and why they work so well within the context of the Japanese band's pop-metal sound. He responded (as transcribed by BLABBERMOUTH.NET): "Metal has gone through a long history of lyrics [being] all almost interchangeable; they have to be dark and they have to be kind of scary and sort of negative and protesting everything. And it kind of works with the sound of aggressive music, but we've kind of really all heard that for a long time. And why wouldn't it work with something with a much simpler and happier and maybe a more positive outlook? Why wouldn't it work? And actually, it does happen to work. So that kind of gave the sound of metal a few more decades of life, I believe. Yeah, it just works — it just works."

Back in 2015, Friedman told Metalholic.com that he was a huge supporter of BABYMETAL, whose members wear gothy schoolgirl costumes, do choreographed dance routines and bang their heads violently.

"I think the best thing about BABYMETAL is the fact that it's very polarizing: you have to either absolutely love 'em or you totally hate 'em," Marty said. "And I think that's the mark of great things. Of course, I love them and have supported them since the beginning. The guitarist in my solo band over [in Japan] is also the guitarist in BABYMETAL. So I definitely… I'm a huge supporter of them, and I think they are a fantastic, fantastic unit. But I could totally see a metal purist go, 'Hey, this is not right. This is not what metal is supposed to be. I can't stand it. It's just not… No. No way. No fucking way.' I totally get it. But that's what I also love about them. I mean, it breaks a lot of rules, and I'm all about breaking rules."