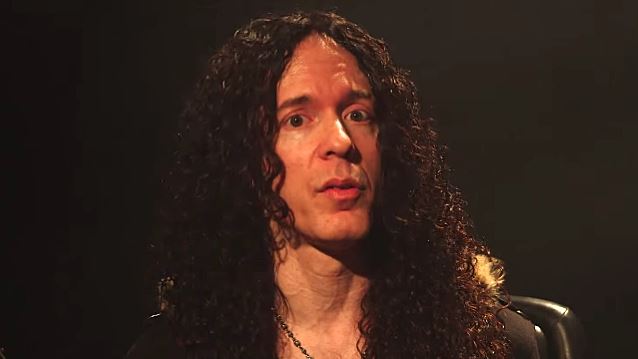 MARTY FRIEDMAN On Rejoining MEGADETH: 'I Wouldn't Rule It Out, But I Wouldn't Get Your Hopes Up Either'

Former MEGADETH guitarist Marty Friedman says that he "would not be against considering" a possible return to the band as the replacement for the recently departed Chris Broderick, but cautions that fans shouldn't "get [their] hopes up either."

Asked by Mark Strigl of the "Talking Metal" podcast (web site) if he has any interest in reuniting with MEGADETH to do another tour or another album, Friedman responded: "Well, I've never really said 'never' to anything like that. But just because there's a vacancy in the band, that's certainly no reason for me to be interested in it."

Marty also confirmed that he is currently working on his autobiography, to be released in late 2015. He said: "It's been a work in progress for the last several months, and we've got a couple of more months to go. And it's gonna be interesting, because, actually, I've really got a lot of things [in my past] that people don't know."

He continued: "When I was in MEGADETH — in America, I'm pretty much mostly known for MEGADETH — but oddly enough, at that time, I didn't do a whole lot of talking other than music-related stuff, guitar-related stuff. We had a vocalist who did a whole lot of the really interesting talking for that band, so there's a whole side of the story — my side of the story — that really hasn't been told. So, of course, that'll be in there, but even a bigger part of the story is what I've done since then. [Being] an American person who's done well in America and then come to a completely different culture and a completely different world and a different language and a different medium, that whole experience, I think, is gonna open a whole lot of eyes out there. And it's got a lot of juicy information in there as well. So it's something that I've been looking forward to doing."

Marty added: "I really wasn't planning on doing it this soon, really, but there have been so many offers to do it, and I got a really good offer from a really great biographer to do this, and a great company, so at least we got started on it. And it's coming along excellent, and I really can't wait for people to read it."

Only hours after drummer Shawn Drover announced his exit from MEGADETH on November 25 to "to pursue [his] own musical interests," Broderick revealed he also quit the legendary metal band, saying that he was leaving the group "due to artistic and musical differences."