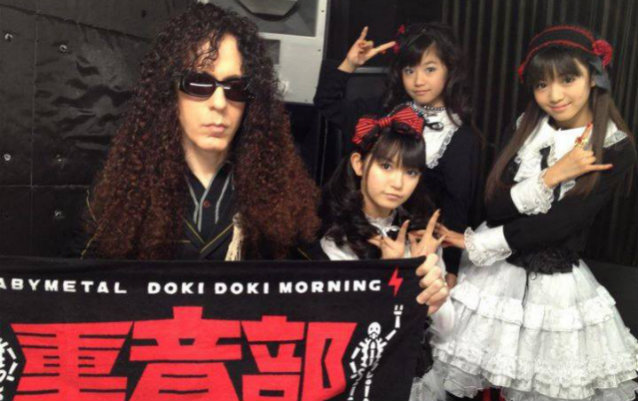 MARTY FRIEDMAN: 'The Best Thing About BABYMETAL Is The Fact That It's Very Polarizing'

Former MEGADETH guitarist Marty FriedmanMetalholic.com that he is a huge supporter of BABYMETAL, the offshoot of the Japanese pop idol group SAKURA GAKUIN that performs a distinctly Japanese mix of schoolgirl J-pop and heavy metal.

Takayoshi Ohmura, the guitarist in Friedman's own solo band, is also the guitarist in BABYMETAL, whose members wear gothy schoolgirl costumes, do choreographed dance routines and bang their heads violently.

"I think the best thing about BABYMETAL is the fact that it's very polarizing: you have to either absolutely love 'em or you totally hate 'em," Marty said (hear audio below). "And I think that's the mark of great things. Of course, I love them and have supported them since the beginning. The guitarist in my solo band over [in Japan] is also the guitarist in BABYMETAL. So I definitely… I'm a huge supporter of them, and I think they are a fantastic, fantastic unit. But I could totally see a metal purist go, 'Hey, this is not right. This is not what metal is supposed to be. I can't stand it. It's just not… No. No way. No fucking way.' I totally get it. But that's what I also love about them. I mean, it breaks a lot of rules, and I'm all about breaking rules."

As previously reported, BABYMETAL has signed with RAL/Sony Music Entertainment for the U.S. release of the band's 2014 critically acclaimed self-titled debut album. The CD features two bonus tracks and was made available digitally on May 12 and physically on June 16.

Friedman has announced his first tour of North America since 2003 — a 21-date headlining run that will kick off September 9. The trek marks the latest leg of Friedman's ongoing world tour in support of "Inferno", his solo album that so far has seen him complete a record-breaking tour across South America; perform extensively in Europe with acts such as Gus G. (FIREWIND, OZZY OSBOURNE),ARCH ENEMY and KREATOR; and play multiple high-profile gigs in his current home country of Japan, including a set at the country's largest heavy metal festival, Loud Park.

The upcoming North American leg of the "Inferno" tour will start in Friedman's former hometown of Baltimore and wrap up on the West Coast on October 3. Support will be provided by the Los Angeles-based extreme shred outfit EXMORTUS.