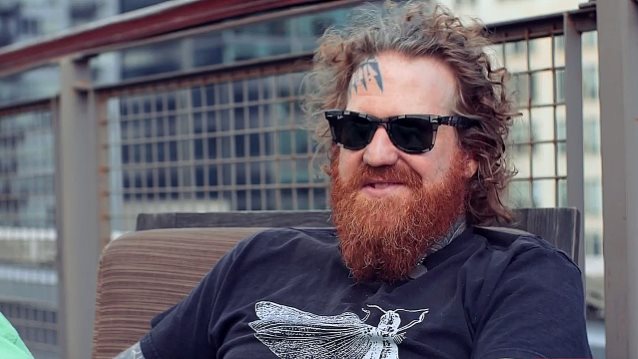 MASTODON's Brent Hinds has broken his leg in a motorcycle accident, it has been revealed.

The guitarist/vocalist posted a photo of himself laying in bed with a cast on his right leg and the caption: "broke my fucking leg starting my motorcycle goddamnit. sorry to all the shows I was about to play with gto and west and more and fiend without a face.lifes a bitch then you die. happy thanking !"

Hinds was about to embark on a short run of dates with GIRAFFE TONGUE ORCHESTRA, his collaboration with ALICE IN CHAINS vocalist William Duvall and THE DILLINGER ESCAPE PLAN guitarist Benjamin Weinman. It is not presently clear if he will still play all the scheduled shows with the group.

MASTODON recently finished recording the follow-up to 2014's "Once More 'Round The Sun" with producer Brendan O'Brien. An early 2017 release is expected.

GIRAFFE TONGUE ORCHESTRA's tour is slated to kick off on October 29 in Boston, Massachusetts.

Hinds earlier in the year appeared as a guest on the AMC reality series "Ride With Norman Reedus" which follows "The Walking Dead"'s most popular actor and motorcycle enthusiast Norman Reedus as he takes viewers on a ride on the open road to explore local biker culture and its history and celebrate some of the best and brightest collectors, mechanics and motorcycle craftsmen around the country.

Broke my fucking leg starting my motorcycle goddamnit ?sorry to all the shows I was about to play with gto and west and more and fiend without a face.lifes a bitch then you die :(happy thanking !