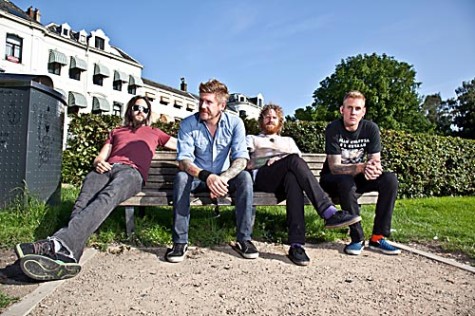 "Dry Bone Valley", the new video from Atlanta progressive metallers MASTODON, can be seen below. The clip was directed and animated by Tim Biskup.

MASTODON bassist/vocalist Troy Sanders recently confirmed that the band will team up with Sweden's OPETH and GHOST for a North American tour in April.

"The Hunter" was made available in several configurations that feature an exciting interactive 3D experience known as Augmented Reality. The technology, created by Los Angeles-based company Total Immersion, combines virtual and real worlds to create a 3D one-of-a-kind interactive experience that users can control. Just by using a camera on a computer, their own face and the cover art on "The Hunter", the user can turn themselves into "The Hunter" sculpture that is pictured on the cover.

The follow-up to 2009's "Crack The Skye" was MASTODON's third studio CD to be made available on Reprise Records in the U.S. and Canada and the band's first to be issued through Roadrunner Records outside of North America.