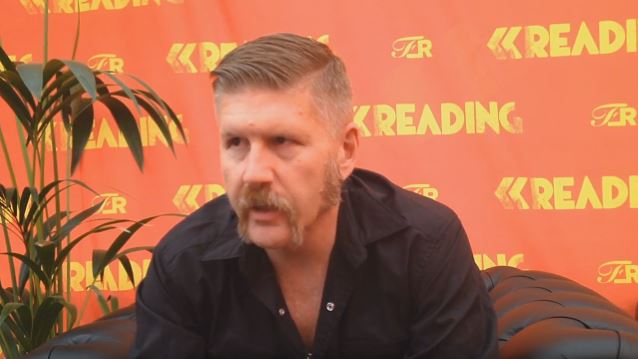 MASTODON Guitarist On Next Album: 'There Are Peaks And Valleys Of One Extreme To The Other'

Asked about the progress of the songwriting sessions for MASTODON's follow-up to 2014's "Once More 'Round The Sun" album, Bill said: "In the past six months, I've built a studio in my basement, where I can sit down there and really write and concentrate, so I feel like out of the eleven or twelve songs that we've got demoed with vocals and a lot of lyrics, but not… The lyrics are always the last thing to shape up together. I think we're pretty close. I think it's not gonna take very long to get in the studio and knock it out. Hopefully [it will be] an early 2017 release."

Speaking about the musical direction of the new MASTODON material, Bill said: "Well, I mean, it's hard for me to say. It's kind of like a garden — you plan everything and it starts to grow and you kind of see what it looks like, but it always grows into something a little different. We have a clean part here, a part that we're not so sure should be heavy. It might turn into a totally acoustic part that goes on and on and grows into something bigger. And a part on a song where I didn't think there would be a guitar solo, now there's a guitar solo there. Some of the proggier stuff we do usually gets a little proggier. Everything kind of starts to [be magnified] tenfold when you get into the studio — you put each piece under a microscope and mold it into more of what you really want it to be. 'Cause when you're writing demos, you're writing stuff off the cuff. I mean, I am — I'm just kind of, like, 'Oh. We've got this cool part. We've got that cool part. What do we use to transition?' It's kind of just like racking your brain, and it doesn't always come naturally. It's, like, 'Oh, I've got that,' and then sometimes that always doesn't translate when you get into the studio. It's, like, 'Uh, we can write something better than that. Let's try this.' So you never really know."

He continued: "What I can tell you is it definitely sounds like MASTODON, and there are peaks and valleys of one extreme to the other. But, you know, to me, a lot of the things that I wrote sound like 'Once More 'Round The Sun', but even delving deeper into all those nooks and crannies or progression and a lot of catchy choruses and just melodic verses and stuff like that, but not so much like 'The Motherload'; that's pretty poppy for us, probably as poppy as we'd ever be sounding. [It's] not quite in that direction, but trying to get into more of a darker… It's hard to say 'dark' and 'pop' at the same time, but, to me, it's an easy way to… When something pops and it really speaks to you and it's catchy, like something you wanna hear again. 'Cause I like to go back to things when I'm writing — something that kind of comes full circle. Not on every song, but a lot of the songs that I've written for this record are like that — they need to come back to the chorus to bring back that same good feeling you got in the beginning. That's just me; I like to tie everything up nice and neatly most of the time."

"Once More 'Round The Sun" sold around 34,000 copies in the United States in its first week of release to land at position No. 6 on The Billboard 200 chart. The record arrived in stores on June 24, 2014 via Reprise Records.