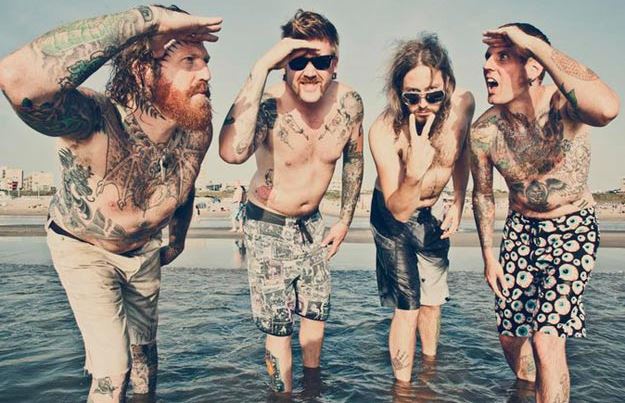 Atlanta progressive metallers MASTODON will enter the studio in a couple of weeks with producer Nick Raskulinecz (FOO FIGHTERS, RUSH, ALICE IN CHAINS) to begin recording their new album for a 2014 release.

Speaking to RollingStone.com, MASTODON drummer Brann Dailor said: "[Nick is] a rock guy. He's a rocker. He likes to rock. He's done a bunch of our friends' records that sound great. I'm a fan of all the DEFTONES records he's done, all the ALICE IN CHAINS stuff, and he worked with QUEENS OF THE STONE AGE on [their 2002 album] 'Songs For The Deaf'."

"It's gonna be massive and insane, lots of epic greatness," he said. "There will be lots of huge riffs and new directions. It's real weird, real math-y, real straightforward. It's up, down and all around. It's a culmination of everything for the band. The snowball keeps rolling and collecting snow."

On December 10, Warner Bros. Records will digitally release "Mastodon Live At Brixton", a recording of MASTODON's February 11, 2012 performance at London, England's O2 Academy in Brixton. This sold-out performance was MASTODON's first show at the legendary venue. An audio-only version and a live video version directed by Ryan Mackfall (Crashburn Media) (both featuring the full 97-minute performance) will be available from all digital retailers, including iTunes and Amazon.

In addition to performing "Curl of the Burl", "Black Tongue" and "Dry Bone Valley" from "The Hunter", the band dug into their catalog, unearthing such scorching tracks as "Colony of Birchmen", "Capillarian Crest" and "Iron Tusk".