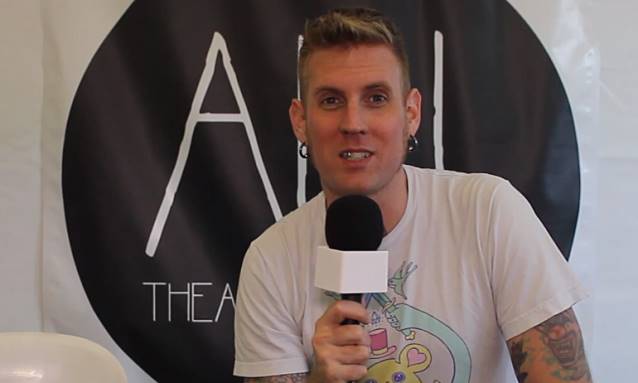 The AU Review conducted an interview with drummer Brann Dailor of Atlanta progressive metallers MASTODON on Sunday, February 23 at the Sydney stop of this year's Soundwave festival in Australia. You can now watch the chat below.

MASTODON bassist and co-vocalist Troy Sanders spoke to Stereogum about the progress of the recording sessions for the follow-up to 2011's "The Hunter". The new CD was recorded in Nashville, Tennesse with producer Nick Raskulinecz, who has previously worked with FOO FIGHTERS, RUSH, ALICE IN CHAINS and EVANESCENCE.

Asked where things stand with the new record, Sanders said: "It's in the mixing process. We wrapped up recording early in February at Rock Falcon Studios.

"I think it's going to be great, but you don't approach it as a whole until all the mixes come in. In the studio you're just working on one song for hours and hours, then moving on to the next one. You get your appetizer, entrée and soup and salad but you can't digest it all until the meal is over. That's where we are now. I like food analogies."

Sanders also spoke about the experience of working with Raskulinecz, telling Stereogum: "Nick is a kickass dude, and when it comes to engineering and producing, he is the rock and roll guy. We bonded with him before on a personal level, which you need because you will work with [producers] for days on end. He's a very hands-on kind of guy, there every moment. I think he truly brought out the best of our ability. We feel like something is good enough, but he is always saying we can do things better. He wanted to capture us at the best of our ability. He also helped Brent [Hinds, guitar], Brann [Dailor] and I get good vocal performances. We know our instruments well but when it comes to vocals he was a trusted and respected fifth member. He helped us explore ideas. So Nick was wonderful. He's a friend and a fabulous rock and roll record producer. We're also fans of the stuff he has done with QUEENS OF THE STONE AGE, ALICE IN CHAINS, the past two DEFTONES, the recent RUSH and the recent GHOST record. It was great to pair us up."

Regading where the new record fits in musically, Sanders said: "Good question. I've been asked if it's taking over where 'The Hunter' left off.

"We don't have any preconceived thoughts and notions when we write. We don't think that we need to have some long, epic songs or we need to have short, upbeat songs. Everything comes off natural through our minds, bodies and fingers.

"I believe it's the next honest step in the MASTODON evolution. We're continuing to carve our own niche. It's another platter we've come up with and it seems to be piecing itself together as a badass rock and roll record."

Dailor recently told RollingStone.com about the band's forthcoming CD: "It's gonna be massive and insane, lots of epic greatness. There will be lots of huge riffs and new directions. It's real weird, real math-y, real straightforward. It's up, down and all around. It's a culmination of everything for the band. The snowball keeps rolling and collecting snow."