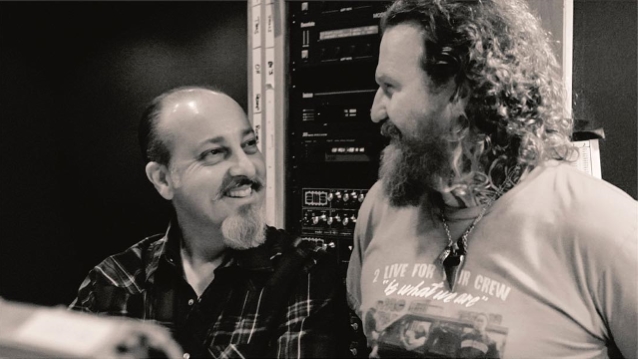 Nick John of The Rick Sales Entertainment Group passed away earlier today after a battle with pancreatic cancer.

Acclaimed rock photographer Andrew Stuart also weighed in on Nick's passing, writing on Facebook: "Still not computing that this day is actually real.

"Rest easy, Nick John. I'm honored to have spent over 15 years working with you, learning from you and becoming your friend. You'll always live on as family. I love you, dude.

"Hug all your people. Hug all animals. Love music.

"Extra love to Nick's wife Colleen, The RSE camp especially my sister/wife Kristen, MASTODON, GOJIRA and every artist whose life and career was touched by Nick."

Late last month, the Atlanta progressive metal band canceled its tour with DINOSAUR JR. "due to a critical situation of a member of the MASTODON family," according to a statement released by the group.

Hinds previously called John "the most kind and beautiful being" and credited the band's manager with being "responsible for MASTODON's success." Drummer/vocalist Brann Dailor also praised John, writing: "I don't know where MASTODON would be without him. He is absolutely integral to the success we have achieved as a band, not to mention one of the best people you'd ever hope to meet. We all deeply love and care for him."

MASTODON's tour with DINOSAUR JR. was scheduled to kick off on September 1 in Edmonton, Alberta, Canada.

Still not computing that this day is actually real.
Rest easy Nick John.
I’m honored to have spent over 15 years working...

Rock in Peace Nick John. Together with Rick Sales you made many many metal dreams come true. Life certainly can be terribly unfair. My heartfelt condolences to your family and @mastodonmusic + all at RSE Group past + present 🙏 https://t.co/QikQSeuTvy