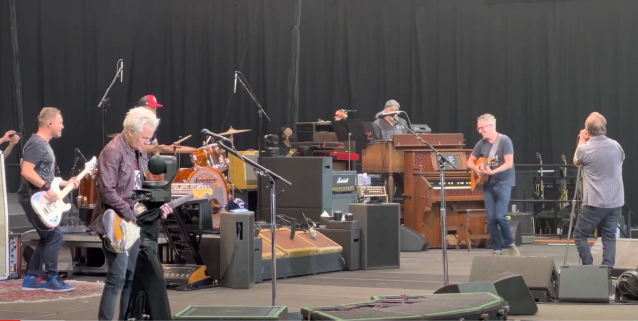 PEARL JAM drummer Matt Cameron was forced to miss the band's concert last night (Thursday, May 12) in Oakland, California after testing positive for COVID-19. It was the first time Cameron missed a PEARL JAM show since joining the band 24 years ago. Touring member Josh Klinghoffer and longtime Jeff Ament collaborator Richard Stuverud filled in behind the kit during the set. PEARL JAM also welcomed a fan to sit behind the kit for the concert's "Yellow Ledbetter" finale.

Klinghoffer was behind the kit for set opener, a cover of Neil Young's "Rockin' In The Free World", as well as "Elderly Woman Behind The Counter In A Small Town", "Why Go" and "Corduroy", before Stuverud stepped in for the tracks "Quick Escape" and "Superblood Wolfmoon".

Before launching into "Why Go", PEARL JAM singer Eddie Vedder told the crowd: "Matt Cameron is a true artist and he's a force of nature. However, even his superhero status could not prevent him from testing positive. This damn COVID thing yesterday. We've been scrambling for 24 hours because after 25 months of… We were supposed to be here 25 months ago. We've been waiting and we've been waiting. Postponing wasn't an option and for us neither was canceling. We didn't want to pull the plug and we couldn't pull the plug. We've got our group here, we've got our equipment here and, most importantly, you're here. So, lucky for us, we have some friends, and one of our friends has already been on our team this tour — the multi-talented, multi-faceted, multi-instrumentalist playing behind the drum kit right now, Mr. Josh Klinghoffer. Like the Shohei Ohtani of rock 'n' roll. Let's let the shit hit the fan and hopefully it's good shit."

Back in 2016, Cameron, who also sat behind the kit for SOUNDGARDEN and TEMPLE OF THE DOG, was asked in an interview with The Trap Set to compare working with SOUNDGARDEN to PEARL JAM. He responded: "It's just different band dynamics in general... I think my role in SOUNDGARDEN is a little bit more of a musical director role, whereas in PEARL JAM it's more of a supporting in the rhythm section kind of role. I think the collaboration I have in SOUNDGARDEN is bigger in the creative realm, but I feel very fortunate to be in two really fantastic bands."

The Pulse Of Radio asked Cameron a while back if he alters his style for either band. "I don't think I do," he said. "I mean, I'm just really trying to play my role in each group. I definitely feel like I support the vocal in both groups. The music around the vocal is a little bit different. But that's the way I've always considered my drumming, is vocal-influenced. I've been lucky enough to play with two of the best singers in modern day history, so I think that's always sort of been my strength as a drummer."