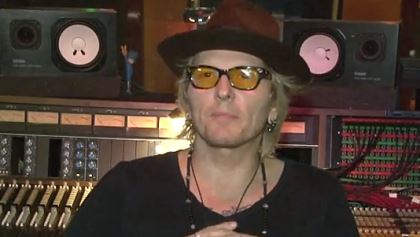 The full 20-minute interview with VELVET REVOLVER and former GUNS N' ROSES drummer Matt Sorum conducted by Artisan News can be seen below.

Sorum helped raise more than $275,000 this past Sunday (September 15) at his Peace Through Music benefit gala, which took place at the Loews Hollywood Hotel in Los Angeles. Sorum partnered with philanthropist and South Asian rock star Shehzad Roy to raise funds for both the improvement of public education and for the arts in underprivileged schools around the world.

The red-carpet gala featured performances by Sorum and Roy, along with Slash, Macy Gray and ex-GUNS guitarist Gilby Clarke, along with appearances from Jane Lynch from "Glee", SUGAR RAY's Mark McGrath, Johnathan Schaech from "Ray Donovan" and more guests.

Sorum said, "Kids learn four times better with music and arts, without which their education suffers and we lose a creative force of the future."

Roy added, "Over 85% of school-going children (in Pakistan) only have access to government schools plagued with low teacher attendance, dilapidated facilities, and a curriculum that encourages rote-learning. Only through government school reform, can all children get quality education."

Lynch, who serves on the board of Sorum's Adopt The Arts organization, said, "Music is a universal language that unites us all, regardless of our backgrounds. Arts help kids think critically and perform better in school making them adults who contribute more to society."

All proceeds will benefit schools maintained in Pakistan for girls' education through Zindagi Trust and two schools in the Los Angeles area being supported by Adopt The Arts.