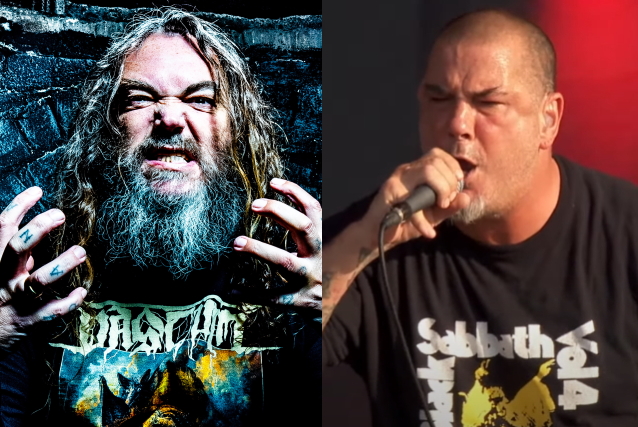 MAX CAVALERA On PANTERA 'Reunion': 'The Fans Deserve To Hear Those Songs'

Former SEPULTURA and current SOULFLY frontman Max Cavalera has once again weighed in on the upcoming PANTERA reunion tour, saying "fans deserve to hear those songs."

The 52-year-old Brazilian-born musician made his latest comments less than a month after Billboard reported that singer Philip Anselmo and bassist Rex Brown, along with ANTHRAX drummer Charlie Benante and guitarist Zakk Wylde, will tour as PANTERA, headlining a number of major festivals across North America and Europe and staging some of their own headline concerts.

According to Billboard, Wylde and Benante's involvement in the project has been approved by the estates of PANTERA's late co-founders, Vinnie Paul Abbott and "Dimebag" Darrell Abbott.

Max, who has spent the last few years playing SEPULTURA-centric shows with his brother, former SEPULTURA drummer Igor "Iggor" Cavalera, told Metal Hammer magazine about the prospect of Anselmo and Brown reuniting for a PANTERA tour in 2023: "It's a delicate issue, man. On one hand, yes. But then sometimes I think if it was like me and Igor had died and somebody else would carry on without us, I don't know how I feel about that. I'm not sure I would really like it. It's a tough one. At the same time, you know, people want to hear those songs. The fans deserve to hear those songs."

Asked if the PANTERA comeback has made him rethink the possibility of doing a SEPULTURA reunion, Max said: "No. I'm good with what we did and so pleased with the reaction. It's a different thing with us and PANTERA; I'm not sure who founded PANTERA and stuff like that, but SEPULTURA was me and Igor. But if they do it the way we did, as a tribute, well, all right, you know? I think we gave the songs justice, we played them as good as they can be played and people were completely satisfied when they came to see us. At this point in my life, I'm satisfied having one foot in the past playing those old records and another in the future doing stuff like [SOULFLY's new album] 'Totem' and KILLER BE KILLED. I want to experience both sides."

Last month, Max told the "Talk Toomey" podcast that it would be "totally cool" if Anselmo and Brown reunited for a PANTERA tour as a tribute to the original albums. Referencing the criticism that has already been leveled at Philip and Rex for touring as PANTERA without the Abbott brothers, Max said: "You kind of can say similar things about our stuff because it's not all the four original guys, but it's as close as you get to that, and it's done really well.

"But, yeah, I'm excited," Max added. "Those [PANTERA] records are so good, they have so many fans, and they should be heard. And rest in peace, Vinnie and Dime, but if it's done right with the right heart on it, hell yeah — I'm totally on board. I think it would be great.

"This new generation, they embrace that stuff. So this music doesn't get outdated. It's not like some stuff that with time just kind of fades out; it's out of fashion. It doesn't happen with this music. So I think all of those records are like that. And, of course, PANTERA is the same vein with 'Far Beyond Driven', 'Cowboys From Hell' — those are some great fucking records, man. People want to hear it. I think it's cool. It should be fun."