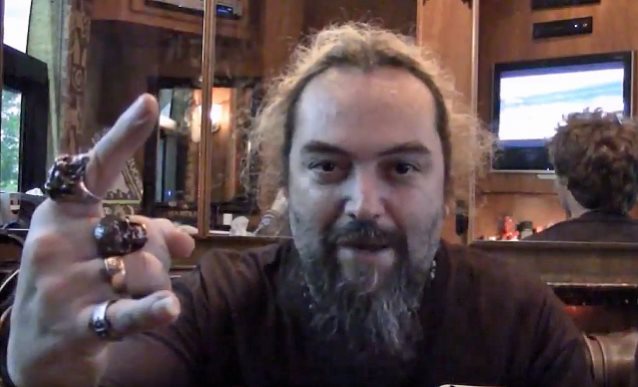 MAX CAVALERA On Playing Entire 'Roots' Album From SEPULTURA: It's A 'Big Task For Us To Pull It Off'

Music Insider TV conducted an interview with Max Cavalera (SOULFLY, SEPULTURA, CAVALERA CONSPIRACY, KILLER BE KILLED) on May 18 at The Boardwalk in Orangevale, California. You can now watch the chat below.

Asked how he manages to split his time between his various projects, Max said: "Right now, after this [SOULFLY] tour is over, I go home for a while, but I think that I'm gonna start writing riffs for KILLER BE KILLED, 'cause I think that might be the next record probably we'll do, which will be next year. The rest of the months, I think, by August, September, October, November and December, it's gonna be all doing the [20th-anniversary tour of SEPULTURA's] 'Roots' [album] with Igor [Max's brother and former SEPULTURA drummer]. So we're gonna be pretty busy with that, so I'm not gonna have time for writing. So right now is the best time to write some riffs. So I'm gonna do that for KILLER BE KILLED right now, and then hit the road for the 'Roots' thing with Igor, which I think has FEAR FACTORY as an opening band, which I'm totally stoked on it; I think that's gonna be great. And I'm stoked to play 'Roots' with Igor too, like, play the whole record. We've never done anything like that before. It's a huge achievement and a big task for us to pull it off. But I think we can do it."

Regarding why he left SEPULTURA in early 1997, Max said: "I think it was just one of those things that just happened that nothing could have changed. It was an accumulation of different ideals. I'm very into integrity and big on loyalty, and half of those guys didn't care much for that kind of stuff, so we kind of butted heads. And it kind of forced me to step up, which I did. 'Cause, honestly, I thought I was gonna be with SEPULTURA forever when I gave the band a name and I was… With Igor, we created [SEPULTURA] in '83. I thought I was gonna be with them forever, but life has different plans, and it comes at you and you have to deal with it. But I think it was kind of a blessing in disguise, because it led me to do other kinds of stuff that I probably could never do if I was still with SEPULTURA. A lot of the SOULFLY stuff, I really dig it. What I was able to accomplish with SOULFLY and CAVALERA CONSPIRACY and KILLER BE KILLED. And I'm proud of my years with SEPULTURA too. I've gotta be proud of those records. They're great records that influenced a whole generation of musicians and bands. So, you know, [there's] nothing wrong with that. So I think it's just one of those things. I'm loyal, and I believe in integrity, and some of the stuff those guys did — I don't wanna get into detail — but some of the stuff they did didn't really click with my ideals, so it was better to split."