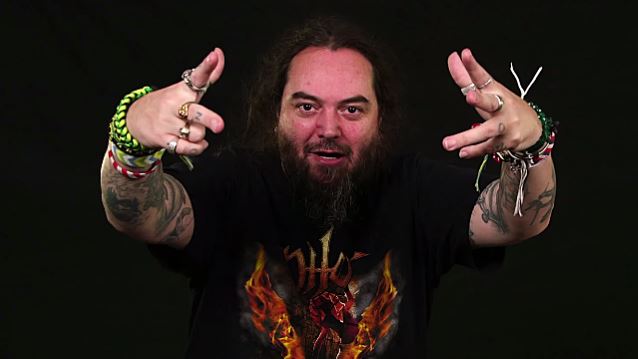 MAX CAVALERA On Upcoming SOULFLY Album: 'I Think A Lot Of People Are Gonna Like It'

The Front Row Report recently conducted an interview with Max Cavalera (SOULFLY, SEPULTURA, KILLER BE KILLED, CAVALERA CONSPIRACY). You can now listen to the chat below.

Speaking about SOULFLY's forthcoming tenth album, which is currently being recorded at a Los Angeles studio with producer Matt Hyde (SLAYER, CHILDREN OF BODOM, MONSTER MAGNET, WINDS OF PLAGUE),Max said: "I've been home working on the new SOULFLY. I'm actually driving tomorrow back to L.A. to put some more vocals on it. I've been doing that for the last weekends. 'Cause the producer, Matt Hyde, who is producing the SOULFLY album, he's also doing the [new] DEFTONES [album] right now, so he has the weekends off. So are are tackling the weekends for the vocals. And it's going great."

Asked if he is planning on doing anything special to commemorate the fact that SOULFLY's upcoming CD will be its tenth full-length effort, Max said: "Hopefully we'll get together with [our record label] Nuclear Blast and plan a couple of special things for the record. Maybe there's some special packages they wanna do. I love doing stuff like that. And I know they like to do that kind of stuff too. It's not every day that you release your tenth record; it's a cool achievement."

He continued: "We're in a really cool place with SOULFLY. We've got [my son] Zyon [Cavalera] playing drums second time around. And he did much better on this album; he's really on fire on the new album. And Marc [Rizzo] did some excellent guitar work; I'm very proud of him. And then Tony [Campos, bass] also did great. So it looks really good, and I think it's gonna be a very strong, full-on album for us."

Regarding the musical direction of the new SOULFLY material, Max said: "Some of the stuff is really fast, actually; like the first couple of songs on the album are all fast. And then it eventually slows down and there's some kind of really heavy stuff. But I think it's a really strong album that I'm very proud of, and I think a lot of people are gonna like it."

SOULFY's ninth CD, "Savages", was released on October 1, 2013. The CD was produced by Terry Date, who is known for his work with such acts as PANTERA, DEFTONES and SOUNDGARDEN, among many others. Guest vocal appearances on "Savages" included SOULFLY bass player Tony Campos, CLUTCH's Neil Fallon, NAPALM DEATH's Mitch Harris, Jamie Hanks of I DECLARE WAR and SOULFLY mainman Max Cavalera's son Igor Cavalera (of LODY KONG).