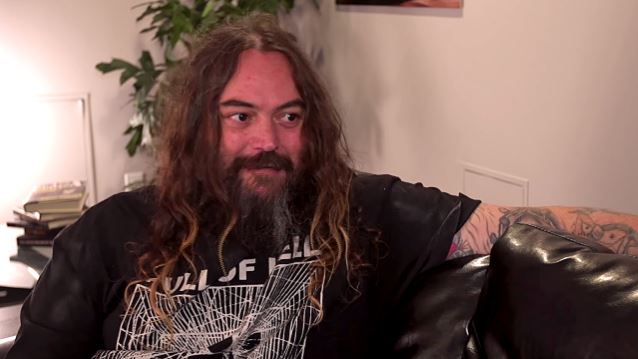 MAX CAVALERA Remembers LEMMY: 'My Relationship With Him Didn't Start Off Good'

Niclas Müller-Hansen of RockSverige.se recently conducted an interview with Max Cavalera (SOULFLY, SEPULTURA, CAVALERA CONSPIRACY). An excerpt from the chat follows below.

RockSverige.se: About the early days, are you a nostalgic person?

Max: Not really. From time to time there might be a YouTube video. It's fun to watch, but I'm not much for living in the past. I'm living right now. A lot of things I didn't feel good about, like the success of [SEPULTURA's] "Roots" [album], that people talk about. For me, it was the worst time of my life. I was drinking and taking a lot of drugs just to cope with it and it sucks. We got so famous that in Brazil I couldn't even go out. It's not for me, man. It's not what I'm here for. Once that died out and we split up and SOULFLY came, it was really cool and it put me back in a place where I belong. Some people might feel different and be longing for that, but I'm not one of those guys. I'm happy playing a small club full of fans. For me, that's the real metal. From time to time, exciting stuff happens, like in Belgium we met the mayor of Gent. His right-hand man was a big SOULFLY fan and he had a SOULFLY tattoo, so he called the venue and asked if I could come meet the mayor. We met the mayor and it was so cool. He was an older guy that spoke Portuguese, so we spoke a little bit. It was kinda surreal and totally like, "What the fuck is going on? Why am I meeting the mayor of Gent?" But I roll with it.

RockSverige.se: "Roots" is turning 20 years old this year and you're gonna play the whole album. Don't you just go, "Where did all the time go?"

Max: Yeah, but I think it's cool. We're doing the U.S. and maybe Europe too. We're looking at it right now. For me it's really interesting to do that with Igor [Cavalera, Max's brother and former SEPULTURA drummer]. First, because I've never played a whole record before. If it works, I told Igor we could do the 30th anniversary of "Arise" or whatever, so we really hope it's gonna work. Igor talks about showing some videos, so we're gonna try and see if that will work. We're looking for a bass player and we're gonna find someone cool to do it. I think it's gonna be cool. The whole record, properly played and properly done. I think the fans are really gonna like that.

RockSverige.se: We lost Lemmy recently. What did he mean to you?

Max: He was great. My relationship with him didn't start off good. We got off on the wrong foot. I was really young and SEPULTURA was opening up for them in Germany. We did a photo shoot and I came with wine and I was throwing it all over him. I was just being a total asshole. In my head, I thought that was rock and roll. I can see how he looked at me and just saw me as an arrogant asshole kid being drunk in the middle of the afternoon. Just being a fucking idiot. We got off on the wrong foot and then we went out on their last show all naked and ruined their show and he wanted to kill me afterwards. He told Gloria [Cavalera, Max's wife and manager], "This guy better not come near me." And I was like, "Ah shit, I pissed off one of my idols. How did that happen?" because I loved the guy and his music. The first time I met him was really cool. I was bugging him and he emptied a whole glass of whisky on my head. I thought that was the coolest thing and I just thought I'd been baptized and I was like, "Fuck yeah!" But he did it to push me away, like, "Let me play my machine." I didn't shower for a week. The greatest thing was at one of our shows in the U.K., right after Dana (Max's stepson who was killed in a car accident 1996) died. He had heard about it and came up to me and was really sorry for my loss and he also said, "By the way, everything is good between us. You're good in my book." I was like, "Cool. Finally." I didn't wanna be the guy that pissed off his idol. It was a funny relationship. I was real sad when he died.

RockSverige.se: Did he ever say if he liked your music?

Max: Yeah, he did an interview for a Brazilian magazine. And he said something that almost made me cry. How important I was for Brazil. "What he did for Brazil and coming out of Brazil like that is an amazing feat." And I thought it was so cool that it came from him. I didn't expect that. The guy from the magazine sent it to me and said, "You're gonna like this." That was cool and very nice.