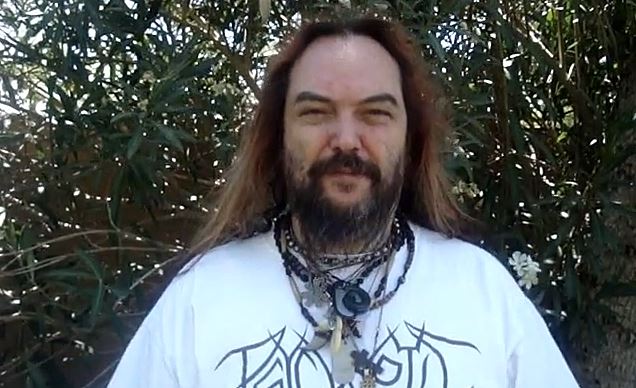 HardRockHaven.net recently conducted an interview with Max Cavalera (SOULFLY, CAVALERA CONSPIRACY, KILLER BE KILLED, SEPULTURA). You can now listen to the chat using the audio player below. A couple of excerpts follow (transcribed by BLABBERMOUTH.NET).

On whether there are any guest musicians on CAVALERA CONSPIRACY's forthcoming third album, due this fall on Napalm:

Max: "There aren't really any guests on the album. Nate [Newton] from CONVERGE plays bass and he sings one song called 'The Crucible' — it's about the witches of Salem; we did a song about that. Nate's got a great voice, 'cause he sings for DOOMRIDERS and I love his voice, so I got him to sing one song. That's the only guest. The CAVALERA album is really more about me and Igor [Cavalera, drums], the brothers, thrashing. This one is almost grindcore. I was really a dictator in the studio with Igor to try to keep him from going into the groove and tried to keep him playing fast; I wanted him play fast for most of the record. So every time he'd go into the groove, I would be, like, 'Fuck the groove! Get out of the groove! Go back to the fast shit.' And I succeeded, man. It's a really brutal album. I think it's definitely the most brutal of all the CAVALERA albums and it's definitely gonna turn some heads when people hear this one."

On whether he had a title for the new CAVALERA CONSPIRACY album yet:

Max: "We were joking [that] 'Fuck The Groove' might be a good title for the record."

On the fact that he is no longer involved with Roadrunner, the label he had been signed to since the early SEPULTURA days in the late 80s:

Max: "All the workers [that used to work for Roadrunner] left, so there's nobody there that was from Roadrunner, so it wasn't even Roadrunner anymore. They're controlled by Warner, and they're a big label, big mentality label, and we don't like that, 'cause we are not a huge band. We do good and we do OK, but we are still a struggling band. I think, for me, it was more important to be on a label that understands, that loves metal, that's not trying to force me to do a radio song, to do a commercial album, 'cause they're not gonna get one out of me anyway. So, for me, it was better to go to Nuclear Blast; they love metal and they love this kind of music. And SOULFLY is very happy there, KILLER BE KILLED is very happy there at Nuclear Blast. And CAVALERA, we wanted to try something different , so we signed with Napalm, which was one of the labels that were after SOULFLY. And we're gonna give them a shot. Maybe they can do something good with the CAVALERA album. We're hoping that they do good. They seem to be doing really good with DEVILDRIVER, and we're gonna give them a shot with the new CAVALERA album that comes out in October."

On whether it's bizarre at all for him to be signed to the same label as his former band, SEPULTURA:

Max: "It really doesn't matter, 'cause I was [on the same label as] them [when we were both still signed to] Roadrunner. So it never really mattered, it never realy bothered me. And I stay out of their way. I don't really have nothing to do with those guys and I do what I have to do. I do my thing and we just share the same label. But I heard a rumor that this [2013's 'The Mediator Between Head And Hands Must Be The Heart'] was their last record anyway, they're not even doing another one, so I don't even know."