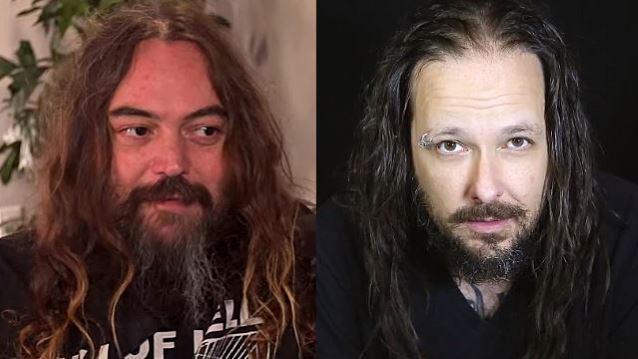 Max Cavalera has accused Jonathan Davis of "being childish" by claiming that SEPULTURA's 1996 album "Roots" was a "blatant KORN rip-off."

Davis made his comment during a recent interview with TeamRock in which he spoke about the bands KORN has inspired over its 23-year career. He said: "One that I thought was a big compliment, but I also thought was fucked up, was SEPULTURA's 'Roots' album. That was just a blatant KORN rip-off, and I had it out with producer Ross Robinson about that, because he just took our sound and gave it to SEPULTURA." He added: "My young brain couldn't handle it. But they were one of our biggest influences, so I guess they get a pass. And that's a classic album, so it's all good."

During a recent interview with the "Démentièllement Vôtre" show on Québec City's CKRL 89.1 FM radio station, Max and his brother Igor, who played drums for SEPULTURA for more than two decades, were asked to respond to Davis's claims. Igor said (hear audio below): "I don't see it like that. I think especially the sound of KORN, in my opinion, with the bass, is horrible. We didn't have that; we had a lot of low end and things that the KORN album didn't have. So I don't see why he would be pissed off, because I don't see that much of a [similarity] between the two of them."

Max went on to say that he is "proud" of "Roots" because it was "a very influential record." He said: "Even some of the KORN guys said somewhere else that they were influenced by [SEPULTURA's] 'Chaos A.D.' when they were making their music, so it's kind of weird to hear that.

"But, yeah, I'm proud of the record. I think it's a great record. It's stood the test of time. It has a great low-end, raw sound. And [mixer] Andy Wallace, on top of it, made it sound completely amazing. And, yeah, I wouldn't change anything. I think it was the right record to make. The tribe stuff was great. The ideas of the album were fantastic. So it was a very pioneering kind of record, because I think it influenced a lot of people in other areas, like in Norway, with a lot of bands like IMMORTAL and ENSLAVED going back to their own original roots of Norwegian Vikings. I think that's all kind of [them] looking at 'Roots' and going, 'Okay, they did that with Brazil. We can do that with our own country.' So I think it's great that we have an album that actually did that. So I look more at 'Roots' like that."

During an interview with ARTISTdirect, Max recalled working with Davis on the "Lookaway" sessions. He said: "Mike Patton was on the song, and Jonathan's a huge FAITH NO MORE fan. He was actually freaking out that Patton was there. He was really nervous, which was actually kind of funny. He kept chewing on his hair the whole time he was in the studio. Ross Robinson teased him at one point and told him to calm down. [Laughs]"