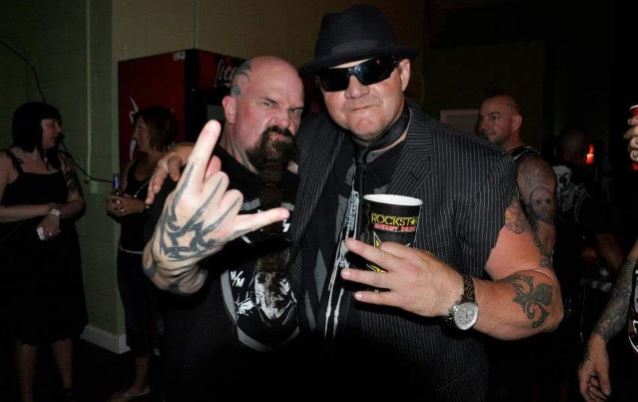 MAYHEM FESTIVAL Co-Founder JOHN REESE To Metal Community: 'It Is Vitally Important That We All Unite, Not Divide'

John Reese (pictured with SLAYER's Kerry King),the co-founder of the annual Rockstar Energy Drink Mayhem Festival, has penned an "open letter" to the heavy metal community, asking everyone to support the genre and not continue to make divisive comments regarding the event.

After Reese's partner, Kevin Lyman, said in an interview earlier in the month that aging metal bands demanded big fees to be on bills and that there was no community spirit, like that which exists in the punk scene, guitarist Kerry King of SLAYER — which is headlining this year's Mayhem festival — criticized the organization of the event and blamed the festival's low attendances on the fact that the 2015 Mayhem lineup is "so shitty."

"We are one community. It is vitally important to our community that we all unite, not divide! Without each other's support, the only thing that suffers is metal as a genre!

"In the midst of our most challenging year in eight years of producing the festival, my partner Kevin Lyman made some comments that he has subsequently apologized for.

"Kevin is an honorable man and has given everything he has to the presentation of music and expanding the profile of countless artists! I am proud of our partnership and our results throughout the years! We have always tried to deliver a platform for artists to expand their fan base and the genre as a whole!

"In saying this, various people involved with the 2015 Rockstar Energy Drink Mayhem Festival and some from the metal community have understandably made some divisive comments regarding the event. The event has suffered as a result of these many comments. What's done is done, but I am here to say that heavy metal music is alive and well! I shouldn't have to remind everyone that we as a culture have faced ostracism from the mainstream for decades and we should not let over-sensationalized media hype separate us! I think we are ALL tired of all of the bullshit. I know I am!

"Let's move the conversation forward supporting each other not dividing.

"Thank you to SLAYER, KING DIAMOND, HELLYEAH, THE DEVIL WEARS PRADA and every single one of the incredibly talented bands that have performed this year on Mayhem!

I would also just like to add a few other choice things for any media conspiracy headlines:

"Marilyn Manson did NOT cause Columbine!

"Obama is not the Antichrist!! And he ain't taking our guns!

"Heavy metal does not cure cancer, but it is good to fuck to.

Lyman told the Detroit Free Press about the festival's 2015 lineup, which also includes KING DIAMOND, HELLYEAH and THE DEVIL WEARS PRADA: "It was the best available for what we had to work with. We had pressure to keep the package at a certain price and make that work, and we had pressure on headliner expenses." In addition, there are fewer acts on the bill and only two stages this time around because "we had to condense it," Lyman said. "The expenses of putting on those shows had gotten high, so we had to push it all into the concourses. They [venues] don't want to build a fence outside [for third and fourth stages] anymore. Those things cost money."