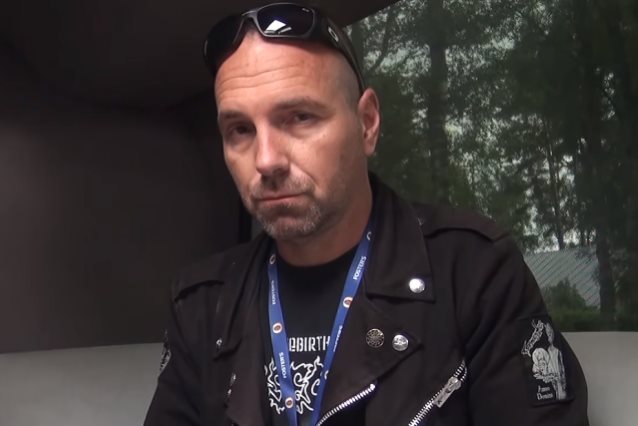 MAYHEM Is 'Slowly' Preparing Material For Next Album

Kaaos TV conducted an interview with MAYHEM and SUNN O))) vocalist Attila Csihar prior to MAYHEM's June 24 concert at the Nummirock festival in Nummijärvi, Finland. You can now watch the chat below. A couple of excerpts follow (transcribed by BLABBERMOUTH.NET).

On MAYHEM's plans for the follow-up to 2014's "Esoteric Warfare" album:

"I heard some vibes already. We have started to shape stuff. It's gonna be different, as it looks like now, of course, but that's our trademark. We don't feel any stress; we just take it very easy. But I heard some tones from Morten [Iversen, guitar] already, I must say, and that was interesting. And we are just figuring out slowly what to do."

On MAYHEM being rejoined by former singer Sven Erik "Maniac" Kristensen during the band's March 26 performance at the Inferno festival in Oslo, Norway and again at this month's Sweden Rock Festival:

"[The Sweden Rock] show was with Maniac [only], because… It's two things. We had some overbooking things. I was on tour with SUNN O))) in the U.S. and there was really important shows in Canada. And the second thing was, we were thinking it was best to do with this thing, instead of canceling, having him play the show. And that's really good for the fans, the new generation, who haven't seen him. And we just had a show with him at the Inferno festival, where we split the set. People really liked it. Sven is a really good friend, not just mine, but the whole band. And I think it shows. We are MAYHEM. We can fucking do this, and it shows how much we are like a brotherhood.

"From my point of view, MAYHEM is MAYHEM. It's like a logo; it's nobody's band. Like, if you think about, I'm the vocalist of MAYHEM, it's been ten years, but it's still in the set, maybe it's like a few songs that actually I wrote and I sing. So I'm used to that, that I perform a lot of other vocalists' stuff and even styles and incorporate their style in my style somehow and kind of move it ahead.

"For me, this band is more than just a band; it's kind of my life. So, Sven, being the singer for ten years, so, of course, he's welcome to play, if the time and the space is right, like this time it was. It has been a plan for a long time; actually, it was my idea for a long time. I wanted to happen. We had this plan even when we had this other show in Oslo [before], but somehow it was not the right time or vibe or space, or we were just on tour, and we could not rehearse the right way, or he was not in the right mindset, maybe. We had this idea for a while now, and he invited me to the stage too, so naturally, I can invite him anytime. I hope it can happen more in the future."