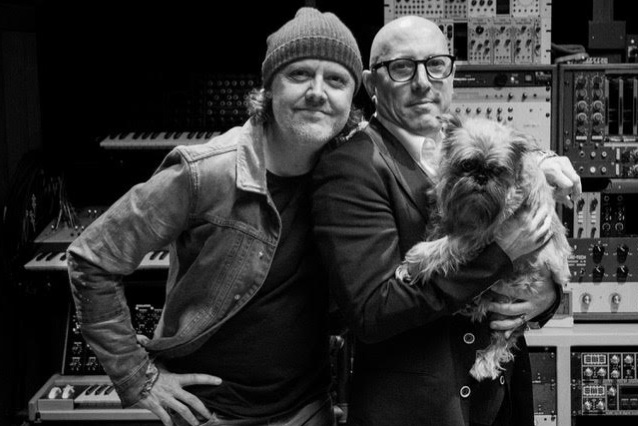 Lars Ulrich interviewed TOOL, A PERFECT CIRCLE and PUSCIFER frontman Maynard James Keenan for the latest episode of "It's Electric!", the METALLICA drummer's online radio show on Apple Music's Beats 1. You can now watch the full chat below.

Speaking about the long time it has taken A PERFECT CIRCLE and TOOL to write and record their respective new albums, Maynard said: "There's a lot of timing issues with TOOL getting to the studio, I always try to gauge where they're at, how things are going, and if I see a window where, 'Okay, doesn't seem like things are going to get done any time soon…' The window might expand based on me going 'I'm gonna go do something then.' That's why you had a lot of PUSCIFER for many years.

"I felt like if I was to go back and I do another PUSCIFER record, someone was gonna sneak into my bedroom and slit my throat, so I figured I'd go and call Billy [Howerdel, A PERFECT CIRCLE guitarist] and see where he's at with music," the singer added.

Keenan also talked about how he manages to stay creative without trying to chase the latest trend or consciously appeal to a younger audience. "Just be okay with not being part of the future, if you can get your head around the fact that you're not going to be part of the next generation's focus," he said.

"It gets easier to get lazy, so the only way to really do that is to always try to figure out some way to take yourself outside of your comfort zone. If you can get outside your comfort zone, you can then tap into things that are in a way fresh. I guess you could chalk it up to staying relevant. At our age now, you see a lot of artists coming out of the woodwork trying to clearly desperately trying to remain relevant, that stinks. That's just stenchy."

The first part of the "It's Electric!" episode feating Keenan will air this Sunday, April 22. The second half will air a week later.

Launched in May 2017, "It's Electric" is an unscripted, unfiltered weekly window into the mind of Ulrich. Hear music that excites this great Dane, as well as chats with artists who inspire him... all wrapped in magnificently mindless banter!