According to Malaysiakini, MEGADETH leader Dave Mustaine has expressed a willingness to remove "offensive" songs from the band's setlist for tonight's (Thurday, May 4) concert in Kuala Lumpur, Malaysia.

It was reported yesterday that the Pan-Malaysian Islamic Party (PAS) Youth had voiced its objection to the MEGADETH show at Stadium Negara. The wing's information chief Hishamuddin Abdul Karim said the approval for the gig was given without taking into consideration the negative effects bands like MEGADETH have on the audience.

Mustaine later took to his Twitter account to ask Malaysian followers to name specific songs that "offend Malaysians or their faith" and said that MEGADETH had to drop certain tracks when touring China.

"If there is a song that offends Malaysians or their faith, please tell me. I wish to offend no one here. We cut songs for China," he wrote.

The MEGADETH frontman was replying to a fan who told Mustaine that PAS Youth would not be protesting at the concert venue.

MEGADETH's concert in Kuala Lumpur will be the band's debut performance in Malaysia since their ban was lifted as the group was previously banned from performing in the country back in 2001. Mustaine later said in an interview that MEGADETH was "banned in Malaysia because some knobhead in a remote area had conducted a black metal séance of some sort and killed somebody, then gave us the indubitable honor of spray painting MEGADETH and SLAYER on the wall."

PAS has previously protested against other concerts before, which it viewed as going against Islamic decorum.

Calls to ban concerts over moral concerns are not uncommon in the Muslim country. In 2013, the aforementioned Jakim raised objection to a planned LAMB OF GOD concert in Malaysia, claiming that the band's music was a mix of metal songs with the reading of verses from the Quran.

In 2015, British extreme metallers CARCASS upset some of their Malaysian fans by posting picture of the Malaysian flag upside down after the band failed to get visas for a show in the country.

An inverted flag is usually used in distress situations or sometimes as a form of protest.

Thank you. If there is a song that offends Malaysians or their faith, please tell me. I wish to offend no one here. We cut songs for China 🙏 https://t.co/Tuq5qBuGTo 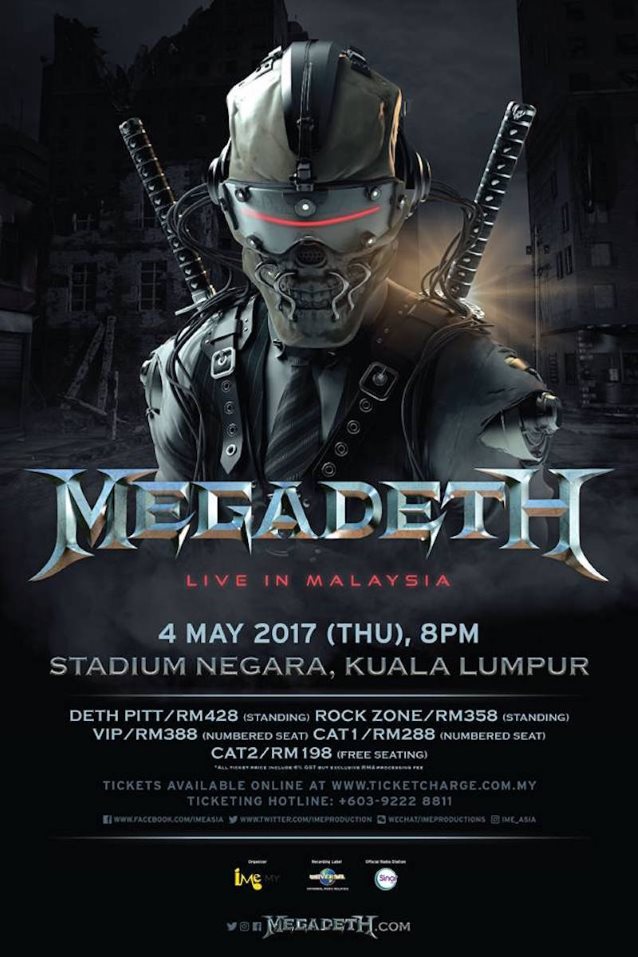