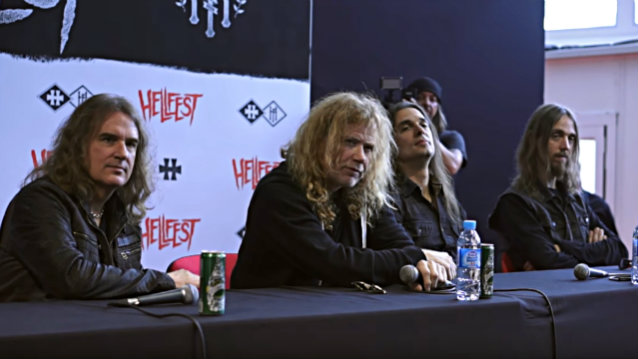 MEGADETH's DAVE MUSTAINE: NICK MENZA 'Meant A Lot To Us'

MEGADETH took part in a press conference on June 19 at Hellfest in Clisson. France. You can watch video footage of the question-and-answer session below.

Asked about MEGADETH's previously announced plan to stage a tribute concert to their late drummer, Nick Menza, featuring past and present members of the band, MEGADETH leader Dave Mustaine said: "When we heard about Nick passing away, it wasn't… We weren't gonna use that for publicity or anything like that. It was a feeling of wanting to do something for Nick's family, his legacy. And we found out… David [Ellefson, MEGADETH bassist] had told me that [Menza's family was] already doing something [to raise funds for Nick's kids]. So then I said, 'Great. If they want our help, great. If they don't need our help, we're here, if they change their minds.'"

Mustaine told EonMusic last week that he "had no idea how much [he] loved" Nick until he broke down following the dedication of a song to his former bandmate at the Rock 'N Derby festival on May 22. Dave said: "Yeah, [my emotional reaction] came out of nowhere. I didn't know what it was, because it was very [well known] how much Nick did not like me, in the things that he was saying [in the press]. And I was not going to retaliate because I loved him, and I think that was evident when we dedicated the song to him. I couldn't finish it, and I usually don't let things stop me from doing by job, but I was overwhelmed with emotion."