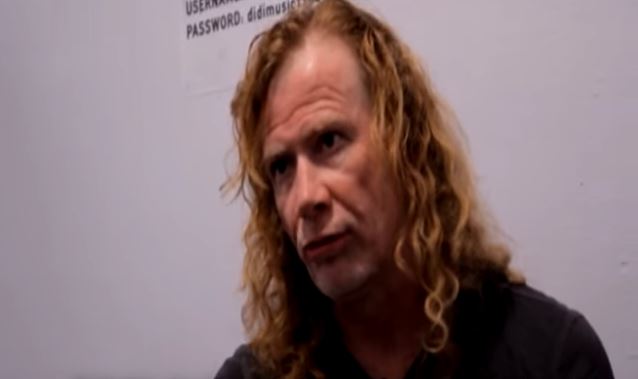 Greece's TV War recently conducted an interview with MEGADETH mainman Dave Mustaine. You can now watch the chat below (starting at around the 15-minute mark). A couple of excerpts follow (transcribed by BLABBERMOUTH.NET).

On whether the dangers of traveling abroad are in the" back of his mind" as he tours with MEGADETH:

Mustaine: "Oh, it's in the front of my mind. 'Cause it's not just the terrorism things that are dangerous that you have to deal with, with ISIS and the Muslim extremists. You know, there are a lot of peaceful Muslims in the world, but there's a lot of people who are Muslim that are part of this movement that is trying to enforce Sharia law. And I had hopes that we would never cross that line, where we would get into any kind of religious battles, because this is a century-old fight that is going on and it's indoctrination where they teach these children from when they're very little, you know, 'This is war.' And I don't understand it and I don't wanna say that I do. All I know is that I like bringing my music to different countries and having people be able to forget about their troubles for the day. There's so much more to worry about than just that. There is the war between the Ukraine and Russia, where you saw the plane from The Netherlands getting shot down. What would have happened if I was on a plane going from Holland to Germany? So I think right now mankind is really, really devolving. As the technology evolves and we make more intelligent weapons, dumber people are getting access to them."

On the relative lack of revenue for artists from streaming music services like Spotify and Apple Music:

Mustaine: "Well, let's just look at the facts. When MEGADETH started, we had sources of income; there was merchandise, there was touring, and there was record sales. With record sales came publishing and the actual record itself that sold. So now, you take that away, and the band only has merchandise and ticket sales. And if people are downloading songs, the record company and the sponsors — which is really important: the sponsors — don't see those sales. So they don't say, 'Oh, you know what? ANTHRAX is selling a half million records. We're gonna buy commercials on the radio station that plays ANTHRAX. They figure, 'We can't tell. We can't tell who's downloading this stuff.' So the metal stations are folding. And when you get out on tour, you don't have that extra income to provide for the bands, so a lot of the bands are breaking up. I saw FOREIGNER the other day at Graspop [Metal Meeting in Belgium], and I thought to myself… You see some of these bands, they break up because they can't afford to do anything, or they will come out of retirement and go back out on tour again, because they've flat out run out of… They don't have any income to survive off of. And the problem with musicians is that a lot of them don't have anything else to fall back on. And it's sad, and I think a lot of that is because there's a breakdown in the love between the band and their fans. A lot of bands act like they love their fans, but they don't; they're just in it for the money. I'm not gonna say their names, but there are several bands that I know that are very big in the United States that are the sons of doctors and attorneys. Excuse my language, but fuck that! What do they know about living in a car? How are they in any way comparable to me or you? I lived in a car. My mom was a maid. I had to beg for food, and I was homeless. David Ellefson and I lived on a street. So when I think of some of those bands, it reminds me of Sharon Osbourne, who I'm happy to call my friend. We were in Spain on an Ozzfest date, and she goes, 'You know, Dave, everyone here except for one person' — she was talking about — she goes, 'is salt of the earth.' I knew who she was talking about. And she was saying, basically, that all of us were working class; we're the same. Versus one person that was in one of the bands that is a spoiled brat and his dad's really rich. You go to sleep hungry a few days in a row and you start to wanna really be successful. It makes you work harder, it makes you be nicer to people."