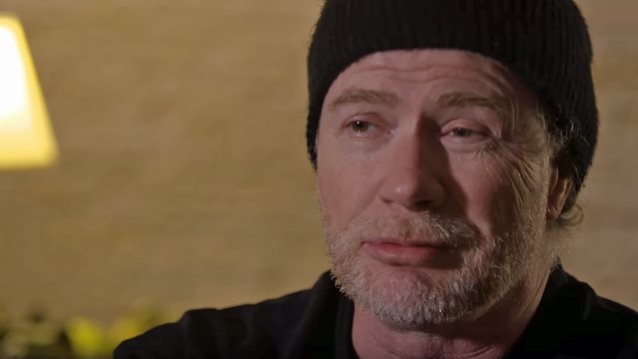 MEGADETH's DAVE MUSTAINE: 'We're Proud To Be A Metal Band'

A couple of days before MEGADETH was honored with its first-ever Grammy, guitarist/vocalist Dave Mustaine sat down with The Recording Academy, which oversees the Grammy Awards, to discuss the band's twelfth Grammy nomination.

Speaking about being nominated in the "Best Metal Performance" category, Mustaine said (see video below): "We're proud to be a metal band. I don't mind being called a rock band, but we're a metal band. And to get nominated again, it's a really great feeling."

Mustaine also talked about the creation of the MEGADETH song "Dystopia", which ended up winning this year's Grammy. He said: "MEGADETH has always pushed the limits of guitar playing, and the vocals have always taken a backseat to the guitar playing.

"With a song like 'Dystopia', which is the song that's nominated, putting those two things together, having MEGADETH be such a strong guitar-oriented band, having the lyrics mean something on top of the guitar riffage in that song, it just worked; it kind of dovetailed together."

Mustaine expressed hope that MEGADETH would finally win its first-ever Grammy, explaining: "It's great to be recognized — it certainly is. To have your peers and your contemporaries to say, 'Hey, this is something that's worthy of standing out amongst a massive amount of releases that came out last year.'

"Because MEGADETH's been around for so long and there's so many really, really super-talented young, new bands, we've gotten to that pinnacle where we're kind of hitting a ceiling. We wanna win it."

As MEGADETH approached the stage to accept the "Best Metal Performance" Grammy at this year's event, the house band inexplicably played the song "Master Of Puppets" from Mustaine's former band METALLICA. But Mustaine didn't seem to mind the mishap, playing air guitar along to the track as he took to the stage to deliver his speech.