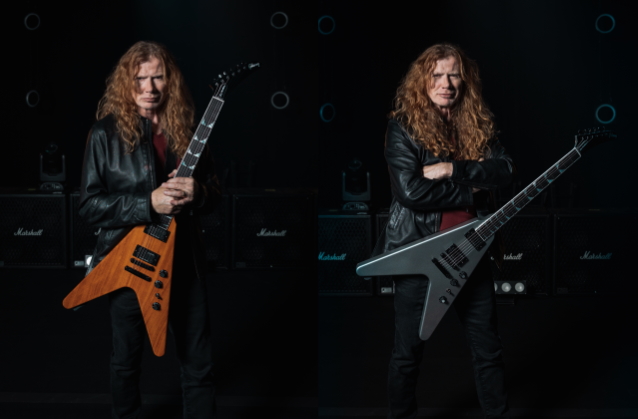 Starting today, the Dave Mustaine Flying V EXP in Antique Natural and Silver Metallic finishes is available on Gibson.com and at select global dealers in very limited quantities. A wider release of units is planned for February 2022.

Gibson is truly honored to be working with Mustaine, a guitarist, songwriter, and bandleader who formed MEGADETH at the dawn of the American thrash metal movement. Mustaine has sold 38 million records worldwide, earned six platinum albums, and is a Grammy Award winner, cancer survivor, and a certified first degree black belt in Ukidokan Karate, and Songahm Taekwondo, an honorary fourth degree black belt and Goodwill Ambassador in the World Taekwondo Federation, and is currently on the way to a first degree black belt in Gracie Barra Jiu-Jitsu.

The Dave Mustaine Flying V EXP guitars are the first in the new Dave Mustaine Collection. These guitars deliver the powerful, heavy sounds and exceptional playing performance on the stage and in the studio that Dave demands. The 25.5" scale mahogany neck has an ebony fretboard with a compound fretboard radius, 24 medium jumbo frets, mother of pearl "teeth" inlays, an Explorer-style headstock with Grover Mini Rotomatic tuners with Kidney buttons, and a Graph Tech nut. The mahogany Flying V-style body is equipped with a Tune-O-Matic bridge, a Stop Bar tailpiece, and a pair of Dave Mustaine's signature Seymour Duncan Thrash Factor pickups. The Flying Vs are available in both an Antique Natural and a Silver Metallic nitrocellulose lacquer finish which are complemented by black chrome hardware. A hardshell case is also included.

For more information about the Dave Mustaine Flying V EXP guitars, go to this location.

In February, Gibson officially announced a new partnership with Mustaine, who joined the company as a Brand Ambassador. The new Dave Mustaine Collection will span acoustic and electric guitars across Gibson, Epiphone and Kramer.