According to the Los Angeles radio station 93.1 Jack FM, MEGADETH will open for German hard rock veterans SCORPIONS on a U.S. tour this fall. The trek will include an October 7 stop at the Forum in L.A. Tickets for that show go on sale this Friday, March 24 at 10 a.m., with a presale on Thursday using the password "crazy."

MEGADETH mainman Dave Mustaine recently said that he was "really excited" about the opportunity to support an undisclosed band on at least one show in the U.S. later in 2017.

MEGADETH has spent more than a year on the road promoting the band's latest album, "Dystopia", which arrived in January 2016. The group is currently scheduled to head back out on tour at the end of April, with three U.S. festival appearances penciled in for July.

Speaking to Meltdown of the WRIF radio station in Detroit, Michigan, Mustaine stated about MEGADETH's touring plans for the coming months: "Believe it or not, we've got some cool things going on for the States. We've got two really great things we're gonna be doing. We'll be heading out some part of the spring or summer, and then we just were told about an opportunity at the end of the year that really, really excited me. It's somebody I've never played with before that we're actually gonna be supporting. They were so cool that we would step down from being a headliner to support this group."

Mustaine offered more information on MEGADETH's two upcoming tours in a separate interview with Billboard. He said: "They're both going to be very different, but exciting. One we're headlining, and it's very much bands of our ilk, and for the other one, we're in a support position for the first time in years. It's a band that I'm a huge fan of. We're really excited to see what these different dates are going to be like and have fans see us in different capacities. The headlining dates will be these diehard fans, and the others where we're going to be out with this band we're supporting, and their fans are going to hear us and won't know us from the man on the moon." 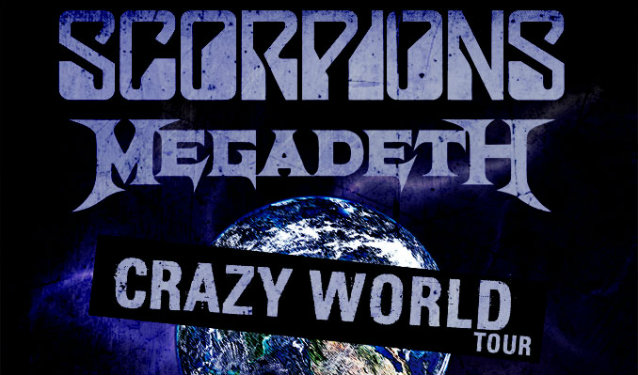