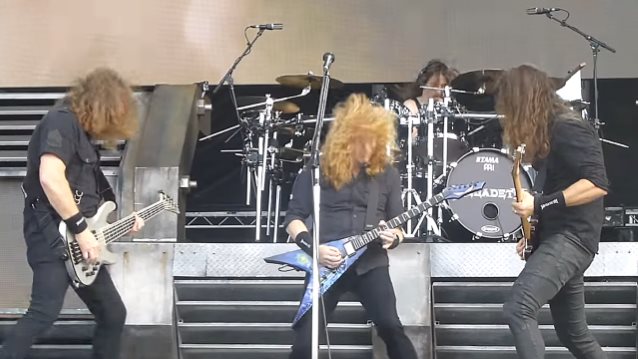 MEGADETH will team up with AMON AMARTH, METAL CHURCH and HAVOK for a U.S. tour in the fall, BLABBERMOUTH.NET can reveal. The trek, which is expected to include an as-yet-undisclosed fifth band, will last for five weeks.

MEGADETH mainman Dave Mustaine recently spoke to Kerrang! Radio about the band's drummer situation after recently recruiting Dirk Verbeuren (SOILWORK) to play drums for the group while Chris Adler is busy touring with LAMB OF GOD.

"We'll see what happens for the future as we grow closer as a band," he said. "We're still trying to figure out what we're gonna do with our drum position. It's great having Dirk here. He's been really wonderful to play with also. So there's not a shortage of great players out there, and we're gonna make our decision real soon."

Adler played drums on "Dystopia" and has taken part in most of the band's live shows in support of the CD so far. On some of the shows where Adler was unable to play with MEGADETH, he was temporarily replaced by Tony Laureano (ex-DIMMU BORGIR, NILE, ANGELCORPSE),the veteran extreme-metal skinsman who has worked as MEGADETH's drum tech since 2011.