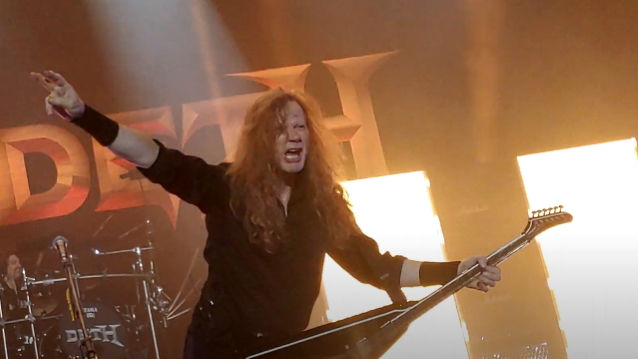 MEGADETH's DAVE MUSTAINE Claims He 'Peed On The Floor' Of White House Bathroom: 'I Had To Do It'

MEGADETH mainman Dave Mustaine says that he "peed on the floor" of the White House bathroom three decades ago.

The 60-year-old guitarist/vocalist, who went to the White House in 1992 with the "Rock The Vote" campaign for the Democratic National Convention coverage, made the outrageous claim while introducing the song "Holy Wars... The Punishment Due" during MEGADETH's concert last night (Sunday, April 10) at the Tucson Arena in Tucson, Arizona.

Mustaine said in part (as transcribed by BLABBERMOUTH.NET): "I want you guys to know that I've lived through a lot of different eras in the United States and seen different things, and one thing that makes me the most proud of everything here in our country is you guys, the way that you are handling yourselves and the way that… as the metal community. There's a lot of people that go out there and they say things and they totally embarrass themselves. And I want you guys to know how proud I am to represent you."

He continued: "When I went up to the White House, I was so proud to be able to go up there and say, 'Fuck you. You think we're stupid? We are not stupid, motherfuckers.'

Three years ago, Dave, who has attracted a fair amount of media attention over the years for his political thoughts, said that he and other public figures have fallen victim to so-called negative partisanship, in which people identify as being against the opposing political party, and vocalize their beliefs through anger or loathing.

"I've got this reputation that I'm a right-winger," Mustaine told Ron Keel of the "Streets Of Rock 'N' Roll" radio show. "Well, check my voting record to see that I've voted Democrat and Republican. And it's just a shame that people are trying to destroy people's careers because of a vote."

Back in 2016, Mustaine refused to say if was going to vote for Donald Trump in that year's U.S. presidential election but called the billionaire real estate mogul "a very successful businessman." He also said that he wouldn't vote for Hillary Clinton.

Four years earlier, Mustaine made headlines when he voiced his support for ultraconservative Republican presidential candidate Rick Santorum. He explained at the time that the Pennsylvania politician looked "like he could be a really cool president… kind of like a JFK kind of guy." That same year, he drew ire on social media when he suggested onstage at a concert in Singapore that President Obama was behind the mass shootings in Aurora and at a Sikh temple in Wisconsin.

Mustaine later blamed media outlets for taking his statements out of context, explaining that he never said he officially "endorsed" Santorum. As for the Singapore concert, he claimed to have been repeating the theories of Larry Pratt, a pro-gun activist who runs the organization Gun Owners Of America.

In October 2011, as Occupy Wall Street protests were raging across the country, Mustaine railed against what he saw as the president's inappropriate support for the populist movement, calling Obama the most divisive president we've ever had. "I've never, in my 50 years of being alive, listened to an American president try and turn one class of people against another class of people," he said. "I've never — never — heard a president say, 'Go down and join the protesters down at Wall Street,' knowing that there are Nazis down there, knowing that there are people down there who are trust-fund babies, that are super, super wealthy and they're going down there and pretending that they really care; they just wanna be part of the 'movement.'"

Dave mustaine!! I peed on the bathroom floor at the White House!!