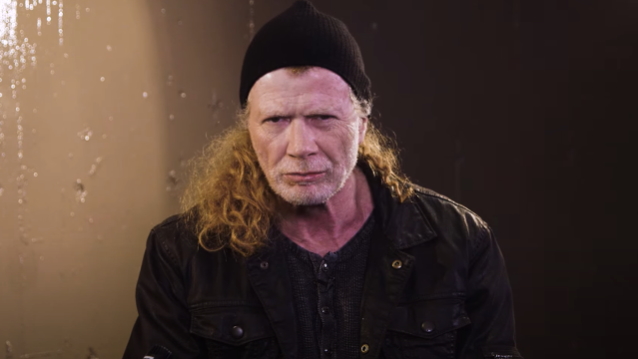 In a new interview with Nick Bowcott of Sweetwater, MEGADETH leader Dave Mustaine spoke about his songwriting process, particularly as it relates to the band's latest album, the just-released "The Sick, The Dying... And The Dead!" He said (as transcribed by BLABBERMOUTH.NET): "I like to take my approach to writing as organic as possible so that I know what the melody is. And it makes it a lot easier for me to sing something over it because I'm not a… I wasn't born to sing. I believe I was born to play guitar, but I don't think I was born to sing. And there's a lot of people out there that would say, 'We agree.' [Laughs]"

When Bowcott noted that Mustaine's singing voice is "instantly recognizable and identifiable," Dave said: "Yeah. It works for me, I think. The funny thing is before I got [throat] cancer [in 2019], I was having a lot of problems with my voice. And then the cancer came, and I got treatment, and I got healed, and then I had to kind of learn how to sing again, which has been bizarre, because it's like learning how to talk again. I think there's a lot of things inside here [points to his neck area] that kind of got messed up from the whole process, 'cause they are putting beams of light through you that disintegrate stuff. And I had nine… I think it was nine doses of chemo and 32 doses of radiology. It was a lot — it was a lot. And when I started singing this tour last leg, I wasn't having a good time singing, but the desire to sing better was there, 'cause I was feeling better about myself. And you'd be surprised when you feel good about yourself how you wanna make that 360-degree feeling. And I'd heard from Kiko [Loureiro, MEGADETH guitarist] — he was living with me for a little while during the record 'Dystopia' — he had said that as long as you get one percent better every day, it's only gonna take a hundred days till you're completely changed and a new you. And I thought, 'You know, that's great.' So that's kind of when I started doubling up on my training and my classes, taking care of myself better and learning a little bit about what's wrong with my voice. I contacted Tom [Keifer] from CINDERELLA [who overcame vocal cord paresis, a condition that typically ends a professional singing career], who's a really nice guy. And we would have been mortal enemies back in the '80s, right?"

Nine years ago, Mustaine said in an interview with Denver, Colorado's classic rock radio station 103.5 The Fox that he became the lead singer of MEGADETH after he and the band's original bassist David Ellefson were "auditioning guys and we kind of ran out of patience. The last guy that auditioned as a vocalist came — and we were homeless at the time — and the guy rolled up with a 12-pack of beer, and we thought, 'Great!' Then we got a closer look at him and he had eyeliner on. And we figured, 'As soon as the last beer was down, he was out of the band,'" he recalled. "It was New Year's Eve one night, and David just goes , 'Man, why don't you sing?' and I was like, 'Why don't you?' So I ended up doing it, and it stuck. I actually enjoy it a lot of times, but it's not my strong point. I've been working really hard at it the last few years. I wish I would have given it as much attention in the beginning as I do now… It's definitely a unique voice sound. You know, you hear people like Axl [Rose, GUNS N' ROSES] or myself or [James] Hetfield [METALLICA] or some of the other people that are really easily identifiable, it's scarce. Like Chris Cornell [SOUNDGARDEN], you hear Chris, you know it's him."