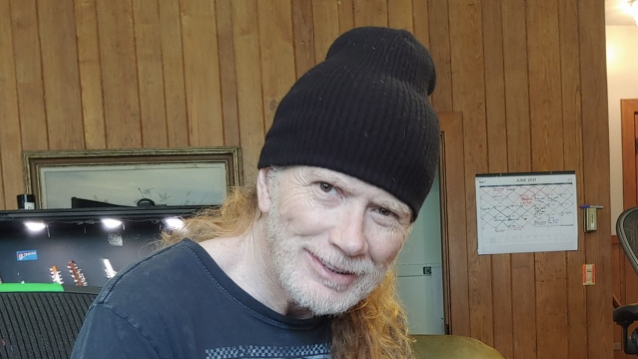 MEGADETH's Dave Mustaine is now on Cameo, an online platform that allows fans to buy personalized video messages from celebrities. The 59-year-old guitarist/vocalist is charging purchasers $150 per video.

In a short video message announcing his partnership with Cameo, Mustaine said: "Hey, I'm Dave Mustaine and I'd like to invite you to have me send a personalized greeting from Cameo for you to your friends. I can say 'Happy birthday,' 'Happy anniversary,' 'Merry Christmas,' 'Happy Hanukkah' — whatever. Or my personal favorite is, like, 'F—.' No, we won't get into that here. But I will tell you that if you do have me do a Cameo for you, a portion of the proceeds will go to charities that I support."

MEGADETH fired David Ellefson in late May, just days after sexually tinged messages and explicit video footage involving the bassist were posted on Twitter. A replacement bassist has not yet been announced.

MEGADETH is scheduled to take part in "The Metal Tour Of The Year" with LAMB OF GOD, beginning on August 20 in Austin. MEGADETH is also slated to appear at the SLIPKNOT-curated Knotfest in September in Iowa.

If you wanna MEET THE REAL ME, find me on @BookCameo. https://t.co/3Zuem0nSNJpic.twitter.com/vWcQPu5ATy