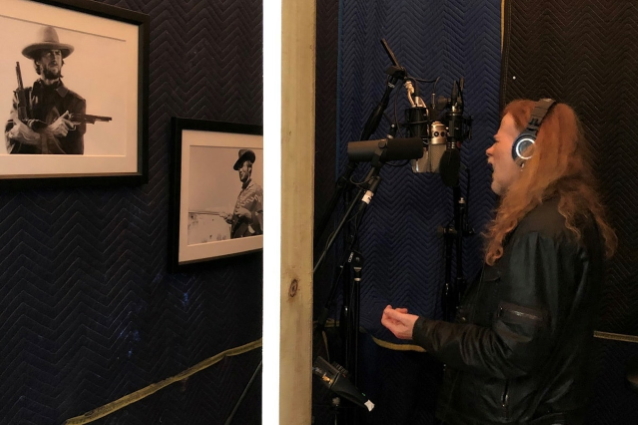 MEGADETH's DAVE MUSTAINE Is Recording Vocals For Next Album

The latest sessions are taking place at Dave's home studio, where Mustaine recently set up a makeshift vocal booth.

Yesterday, MEGADETH's social media was updated with a photo of Dave in the studio, along with the following caption: "Laying down some vocals today! #Megadeth16"

MEGADETH's new effort will be the first to feature drummer Dirk Verbeuren (ex-SOILWORK),who joined the band almost four years ago.

Late last year, Dave teased songs that were "heavy as hell" with titles such as "Rattlehead Part Two" and "The Dogs Of Chernobyl".

"I don't know if any of those titles are still holding up," he told Metal Hammer earlier this year. "Whenever I make a record, the names of the songs change so many times. I think we've got 14 songs for this album and another folder with six. The songs are constantly evolving and as they do, we change the title to be more reflective of what makes the song distinct."

In a recent interview with Detroit's WRIF radio station, MEGADETH bassist David Ellefson stated about the progress of the songwriting and recording sessions for the band's new disc: "We were going to start recording the new record at the end of March. Of course, that's right as everything was shutting down [due to the coronavirus pandemic]. And our drummer Dirk lives in Los Angeles, and California was one of the first states to really shut things down.

According to Ellefson, the new songs take the MEGADETH sound to the next level without compromising the group's core approach.

"We got together in 2019 — in the summer, we got together for about two months," he said. "And we worked together. We lived in a band house next to the farm where Dave lives in Nashville. And it was great. One of the things Dave said, he goes, 'These last bunch of years, it's almost like we get together, we plug in, we record our parts, we all go home and that's it.' So he goes, 'I really wanna spend the time listening. Like, record it, sit back, listen.' And even when he was going through his cancer treatments here at the end of 2019, in an ironic twist of fate, it gave us time to get away from the record, 'cause we worked really hard on it for two months there last summer and essentially pieced it all together. But then, stepping back, getting away from it, fresh ears, coming back to it, one thing that hit us is how good it is. I mean, management was, like, 'Oh my gosh! This is next level, beyond 'Dystopia'. This is absolutely perfect. This is the next-level record for MEGADETH.' And I listened to it and I was, like, 'You know, I think they're right.' 'Cause sometimes you can get so close to the creative process, you're in it and you can't tell. I guess it's like if you keep tasting the soup, you don't really know if you put too much salt in it. So we stepped back a little bit, and when we regrouped and listened to it again, we were just, like, 'Wow!' I think we went past where we thought we were on this and I think we're now into a new era of this new record."

Guitarist Kiko Loureiro made his recording debut with MEGADETH on "Dystopia", whose title track was honored in the "Best Metal Performance" category at the 2017 Grammy Awards.

MEGADETH and LAMB OF GOD are scheduled to embark on a 55-date tour this summer.

Laying down some vocals today! #Megadeth16