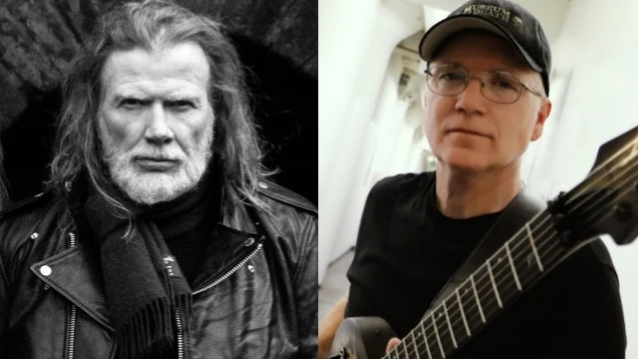 MEGADETH's DAVE MUSTAINE On CHRIS POLAND: 'As Much As I Don't Really Like The Guy, He Was A Great Guitar Player'

In a new interview with Darren Paltrowitz (host of the "Paltrocast With Darren Paltrowitz" podcast),MEGADETH mainman Dave Mustaine spoke about his new book, "Rust In Peace: The Inside Story Of The Megadeth Masterpiece", which details the making of the band's iconic record "Rust In Peace". Asked if he got to present his commentary first before the other people involved in the making of the record offered their point of view, or if it was the other way around, Mustaine said (hear audio below): "We kind of went along as the book took shape. I talked with [co-author] Joel [Selvin] regularly, and he spoke with a lot of the other contributors to the book, and we just started to piece everything together. It was much like the Tower of Babel — it just continued to grow.

"One of the things I thought was really funny is how the content changed, not only in what it was, but how it was presented," he continued. "You're listening to one guy, and then, a couple of paragraphs later, the same dude totally [ended up] contradicting himself. So that was really fun and very rewarding for me, because it shows you that some people forget. It's not the end of the world, as they do. And the other thing is that I'm not as bad as they make me out to be. And you can see that — where they say stuff, and then, later on in the book, they'll say something totally different. Which I appreciate them telling the truth. I think it's great, 'cause I wanted everybody to know how truly talented those guys were."

Mustaine went on to single out former MEGADETH guitarist Chris Poland, who famously sued Dave over the 2004 reissue of "Rust In Peace", which contained demos on which Poland performed.

"Rust In Peace: The Inside Story Of The Megadeth Masterpiece" is due on September 8 via Hachette Books.