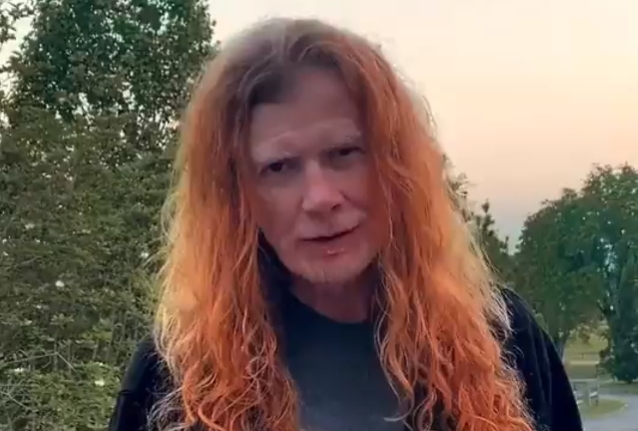 Dave Mustaine has released a new video message in which he wishes MEGADETH fans "a very happy Memorial Day weekend." The 30-second clip also includes footage of Mustaine playing one of his new signature Gibson guitars, as well as promoting a "Memorial Day flash sale" at Craftshack, where fans can purchase MEGADETH's two beer collaborations with Unibroue, À Tout Le Monde and Saison 13.

Mustaine's social media activity comes less than a week after MEGADETH fired bassist David Ellefson following accusations that the bassist groomed a minor. On May 10, sexually tinged messages and explicit video footage involving Ellefson were posted on Twitter. The longtime MEGADETH member later released a statement on Instagram denying all social media chatter that he "groomed" an underage fan.

"We are informing our fans that David Ellefson is no longer playing with MEGADETH and that we are officially parting ways with him. We do not take this decision lightly," the band wrote in a statement.

"While we do not know every detail of what occurred, with an already strained relationship, what has already been revealed now is enough to make working together impossible moving forward."

The May 24 post, which was signed by Mustaine — who formed MEGADETH with Ellefson in 1983 — concluded that the remaining members "look forward to seeing our fans on the road this summer, and we cannot wait to share our brand new music with the world. It is almost complete."

Two days later, Ellefson released a follow-up statement in which he vowed to file a "defamation lawsuit" against the person who "illegally posted a very private video" of the bassist and made "false allegations" against him. He also said he was working with the police in Scottsdale, Arizona "in their investigation into charges regarding revenge pornography to be filed against the person who posted the video. This person will be prosecuted to the fullest extent of the law," Ellefson wrote. He went on to say that he was "taking this time to be with my family" and wished his "bandmates" the best with their upcoming tour.

MEGADETH has yet to announce a replacement for Ellefson, who was in the band from its inception in 1983 to 2002, and again from 2010 until his latest departure.

Our Memorial Day Flash Sale is happening now at @Craftshackbeer! Get an 18 Pack of Unibroue Megadeth Beer and save $30. Pack includes 12 cans of Saison 13 + 6 bottles of A Tout le Monde, plus FREE Shipping. Order now through the weekend here: https://t.co/yuOsWAh2pGpic.twitter.com/AdpnRTyQE7