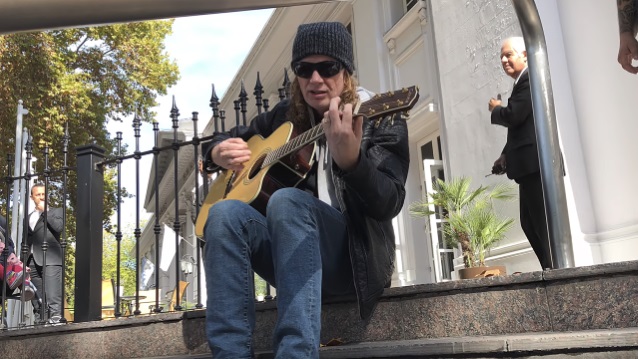 Dave Mustaine played a surprise acoustic set for fans outside his hotel in Mendoza, Argentina on May 10. The MEGADETH leader was in town for a few days of relaxation, as well as visits to local wineries, after playing a couple of shows in Mexico earlier in the month.

When Mustaine's presence in Mendoza was revealed by the local media on May 9, many MEGADETH fans gathered at the door of the Park Hyatt hotel to get a glimpse of their idol. Dave eventually came out, armed with an acoustic guitar that was provided by Felipe Staiti, guitarist of LOS ENANITOS VERDES, and began playing on the hotel's steps.

Fan-filmed video footage of the event can be seen below.

MEGADETH has a number of European shows lined up in June and July before tentatively entering the studio later in the year to begin recording the follow-up to 2016's "Dystopia" album.