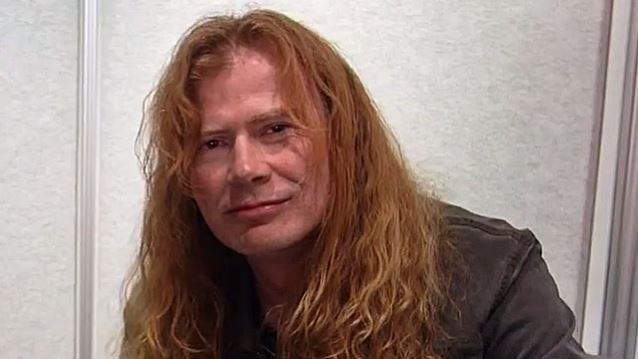 MEGADETH's DAVE MUSTAINE: What Motivated Me To Create My Own Sound And Style

Peter Hodgson of Seymour Duncan conducted an interview with MEGADETH mainman Dave Mustaine at last month's NAMM show in Anaheim, California. You can now watch the chat below.

Asked what motivated him to create his own sound and style of guitar playing, Mustaine said: "Well, it's kind of like having someone slam your hand in the door of a car. You can either sit there and do nothing and accept the pain, or you can open the door and go up there and kick that guy's ass. And that's basically what motivated me to play guitar. There was a lot of things in my life I didn't like. I was getting picked on as a kid, and I was able to express myself through the guitar. Because, when you're 13, and you're strawberry blond, and you're skinny, and you're freckle-faced, and you're going to a school where everybody's a surfer and stuff like that, you get picked on. And when you get picked on long enough, you either start doing something that's gonna help you defend yourself, which is when I started martial arts, or you do something that helps you raise your value to the people around you. Which, for me, I had gone to a bunch of keg parties keg parties — you know, keggers and beer and shit — and there was people playing there, and I was, like, 'Wow! Everybody loves these guys. Because he's got a guitar.' And that's when I started playing. I was 13."