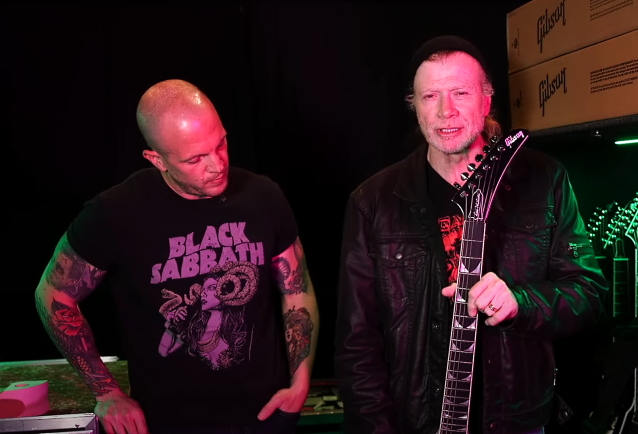 Prior to MEGADETH's May 5 concert at Nashville's Bridgestone Arena, Premier Guitar's Chris Kies talked gear with the band's leader Dave Mustaine, who ran down the specs of his signature Gibson Flying V and showed why it's the best body shape for ripping onstage. MEGADETH's dexterous lead guitarist Kiko Loureiro also showed off his stash of dashing Ibanez doublecuts. And both players (plus their techs) shared insight on downsizing from an Axe-Fx to a gig-bag-friendly Neural DSP Quad Cortex. Check out the clip below.

Mustaine is a guitarist, songwriter, and bandleader who formed MEGADETH at the dawn of the American thrash metal movement. Mustaine has sold 38 million records worldwide, earned six platinum albums, and is a Grammy Award winner, cancer survivor, and a certified first-degree black belt in Ukidokan Karate, and Songahm Taekwondo, an honorary fourth degree black belt and Goodwill Ambassador in the World Taekwondo Federation, and is currently on the way to a first degree black belt in Gracie Barra Jiu-Jitsu.

In February 2021, Gibson officially announced a new partnership with Mustaine, who joined the company as a Brand Ambassador. The new Dave Mustaine Collection spans acoustic and electric guitars across Gibson, Epiphone and Kramer.

MEGADETH's 16th studio album, "The Sick, The Dying… And The Dead!", will arrive on September 2 via UMe.