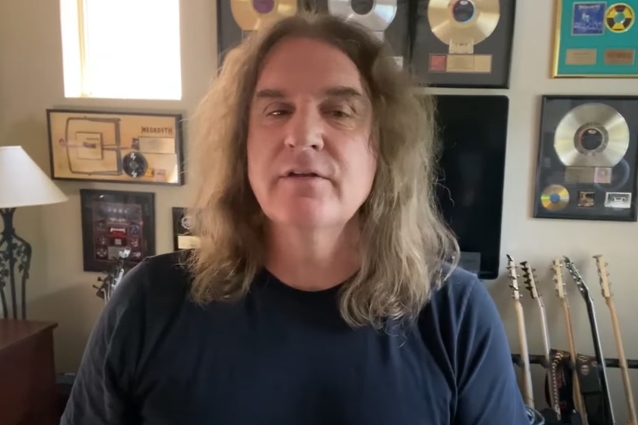 Former MEGADETH bassist David Ellefson has collaborated with the visual art team SceneFour on an art collection crafted from a new medium in artwork, bass performance. The pair have built a stunning art collection that showcases the instrument in a new dimension. Each work is highly limited in availability.

A new teaser video for the "Bass Luminosity" collection is available below.

Ellefson apparently built visuals for canvas based on the movement of his fingers on the frets using a proprietary LED-tipped glove. The result is an astonishing collection of artworks that showcase the unique style of the bassist in a visual form.

"Bass Luminosity" by Ellefson will be unveiled on September 8 worldwide.

Join the interest list at www.davidellefsonart.com for details and an early preview.

SceneFour is primarily known as the team responsible for the "rhythm-on-canvas" medium, having released art collections over the last several years with a highly select group of drumming legends, including Bill Ward (BLACK SABBATH),Rick Allen (DEF LEPPARD) and Dave Lombardo (SLAYER).

SceneFour, a Los Angeles design and branding firm, uses LED technology to transfer the musicians' unique style onto a canvas. The art reportedly provides a "musical fingerprint" that is as unique as an artist's autograph.

"Each guy's artwork looks drastically different because their styles and techniques are different," Cory Danziger, who co-founded SceneFour in 2004 with Ravi Dosaj, a graphic designer, told The New York Times.

"Bill Ward's artwork is dark and there’s kind of a foreboding element to it, whereas Chad Smith's has kind of a light and airy feel to his playing. His arms are open and those pieces have a butterfly effect," Danziger said.