David, a native of nearby Jackson, Minnesota, spent his formative years, pre-MEGADETH, performing on the club circuit in Iowa, Minnesota, and South Dakota. Ellefson was inducted in the "individual artist" category, for his achievements both as a recording artist and performer, and as a producer, writer, and entrepreneur, including his work with EMP Label Group, Ellefson Coffee Co., ETA (Ellefson Touring Agency) and the recently relaunched Combat Records.

"Growing up in Jackson, which is right on the border with Iowa, I spent as much time in Iowa, as I did in Minnesota," Ellefson says. "My mom was from Iowa, and really, so much of my life growing up was here. The Iowa circuit is where I really cut my teeth as a musician, before moving to L.A. and joining MEGADETH, and it's such an amazing honor to be recognized with the Iowa Rock 'N' Roll Hall Of Fame Class of 2018. After the Grammy win for 'Dystopia', it was really a cherry on top, to be recognized by my peers, and the great people back home, and to get to come back and participate in this amazing weekend."

The induction came with a permanent Ellefson exhibit on display in the Iowa Rock 'N' Roll Hall Of Fame Museum, in Arnold's Park, Iowa, featuring one of Ellefson's personal Jackson Kelly Bird signature basses, which kicked off the weekend with Ellefson performing an intimate "Basstory" masterclass on Saturday morning, and, with partner Thom Hazaert, judging the finals of the statewide Iowa Rocks Battle Of The Bands competition.

The induction weekend closed out with an all-star jam Sunday night, with Ellefson participating along with the rest of the 2018 inductees.

Earlier this month, Ellefson was honored at the Independent Entertainment Summit (IES) in Los Angeles, where he was presented (by former MEGADETH guitarist Chris Poland) the "Trailblazer Of The Year" award (along with Warped Tour founder Kevin Lyman),for "starting his successful indie label EMP, reactivating Combat (which originally released MEGADETH's 'Killing Is My Business'),starting his management company, indie booking agency and coffee company, in addition to touring the world and headlining festivals and arenas with the mighty MEGADETH!" 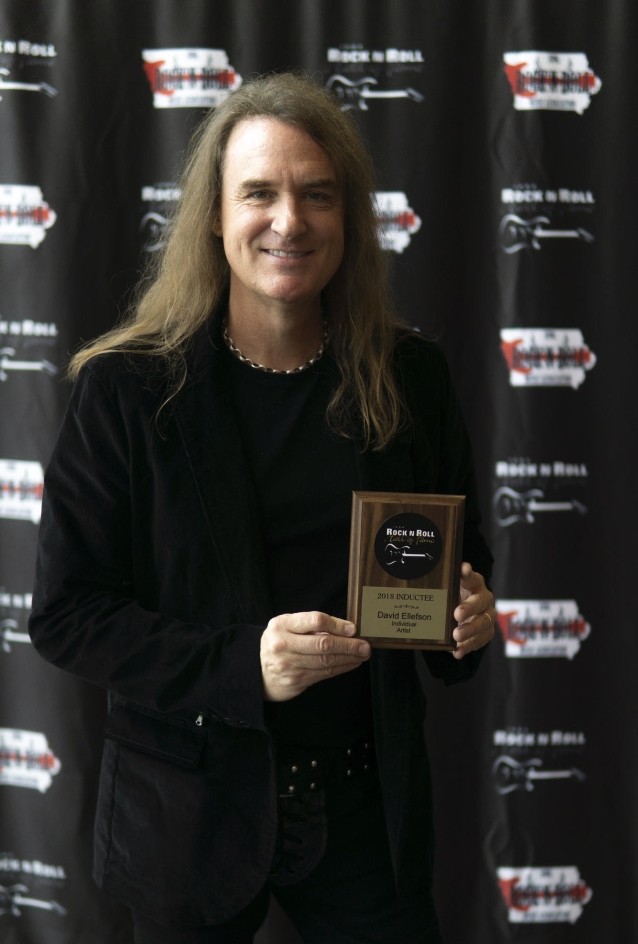 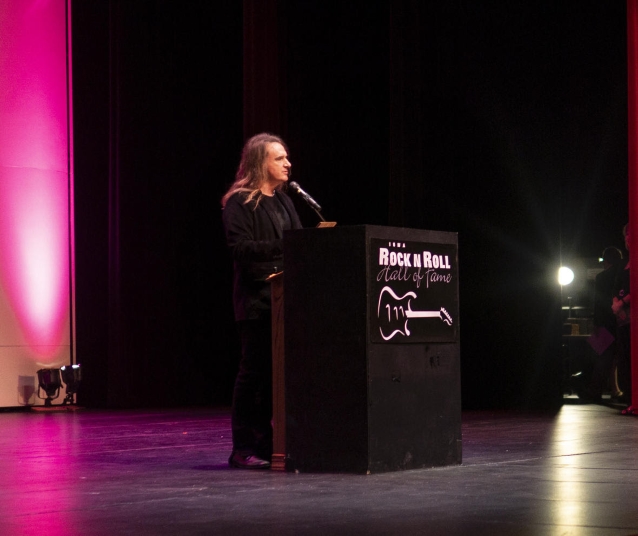