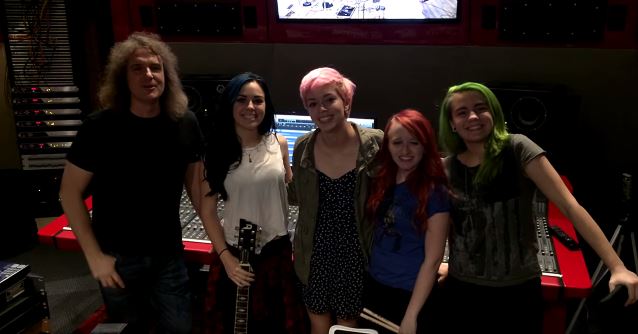 MEGADETH bassist David Ellefson has created an imprint called EMP Records through the legendary label Megaforce, also known as the launching pad for legendary thrash bands METALLICA and ANTHRAX. The imprint's first release will be "In Your Face", the debut six-song EP from the Arizona-based all-female rock quartet DOLL SKIN.

Ellefson says: "When I was first introduced to DOLL SKIN, I knew there was something really special there. Through working with them as a producer, it became even more apparent what these girls were capable of. I'm really excited to be working with them, and able to unleash them on the world, through Megaforce, no less."

DOLL SKIN vocalist Dolezal echoes David's sentiment. "Working with David has been one of the most amazing experiences you could imagine. He's such a cool guy, and a great producer, and has created such amazing opportunities for us. Every day it's kinda like, pinch me, ya know? We're so excited to finish this record and finally release it."

Formed in Arizona in 2013, DOLL SKIN's members — vocalist Sydney Dolezal (15),guitarist Alex Snowden (16),bassist Nicole Rich (17),and drummer Meghan Herring (19) — met while attending the Scottsdale School of Rock. Meghan made the initial connection when bringing the girls together to compete in Rock Revelation Battle Of The Bands. After catching the attention of Ellefson, who was one of the competition's judges, the band began a sonic assault on the West Coast, playing shows with SOCIAL DISTORTION, GREEN JELLO, D.R.I., SLUNT, and many more, through Arizona, California, and the West Coast.

The band recently wrapped production on a video for "Family Of Strangers", which will be released later this fall.

Due on October 30, "In Your Face" features the following tracks:

Check out the song "Family Of Strangers" at this location. 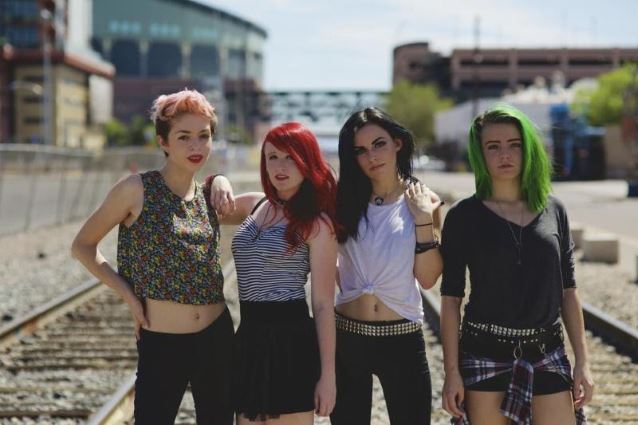