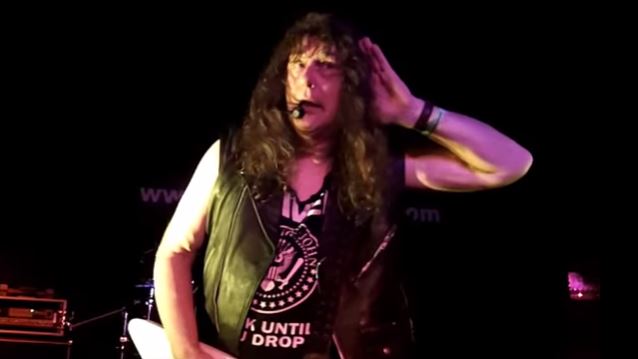 RAVEN's JOHN GALLAGHER Is Not Into Death Metal-Style Growling: 'I Don't Call Them Vocals'

Andrew Epstein of Zombietrol Productions conducted an interview with bassist/vocalist John Gallagher of the British/American heavy metal trio RAVEN prior to the band's September 2 performance in Toronto, Ontario, Canada. You can now listen to the chat using the SoundCloud widget below. A couple of excerpts follow (transcribed by BLABBERMOUTH.NET).

On growing vocals in death metal:

"I don't call them vocals; it's just noises. But, you know, that's my opinion. Everyone's got their own opinion, and all the opinions stink.It's like the old joke: everyone's got an asshole, blah blah blah. But, just personally, I wanna hear a melody in my music, and when I hear music without melody, it's usually rap. And I don't like rap. So when I hear death metal… I mean, there's some bands that have got guttural vocals that are wonderful bands and they have good music, but I can't get past the vocal thing; it's just not my cup of tea, you know."

On the physical demands of doing death metal growls:

"I'm sure it's not easy. I mean, you can say, yeah, anyone can do that, but to do it consistently and do it night after night, you'll [end up] with a sorer throat than I've got right now. So I don't envy that. But, to me, it's just not pleasing to the ears. It's like having everything ugly: ugly guitar tone, ugly drums, ugly bass, ugly singing.

"Hey, knock yourself out. I just… You know, we're playing music, and there should be songs. They wouldn't know a good tune if it hit them on the head, some of these bands."

"We've never stood still. You can instantly tell it's the band, but we don't sound… From album to album, it always sounds a little different; it really does. We do try to push the envelope and bring different elements into what we're doing. But it's a balancing act. You don't wanna completely — which, I mean, we've done it before in the past — you don't wanna completely alienate your audience or your mission statement, as it were. You know, the band's sound is built on melody, structure and chaos… When you put [the chaos] in, then that's when the magic happens. You've gotta have that little bit of uncontrolled lunacy going on there, and that's a big part of what we do. And it's a big thing that's missing in a lot of music today. I mean, we're listening to DEEP PURPLE right now. I mean, c'mon, man! That's the bible. You listen to 'Made In Japan', that's five guys interacting with ESP [extrasensory perception], not knowing what's gonna happen next. When I hear something that's just pat, the guy obviously worked his guitar solo out for six months before he went into the studio and it's all arpeggios and tapping. And that's all great, but is there any soul or fire or passion? That's what I wanna hear, you know."

RAVEN's new album, "ExtermiNation", was released in April via SPV/Steamhammer. The effort was made available as a digipak version (including one bonus track),2LP gatefold green vinyl version and as a digital download.

RAVEN raised more than $27,000 in a Kickstarter crowd-funding campaign to finance the recording of its new studio album. The band recorded a full-length covers CD titled "Party Killers" that was given away as an exclusive Kickstarter reward for backers. The group also offered exclusive t-shirts, patches, and a seven-inch vinyl single via the campaign.