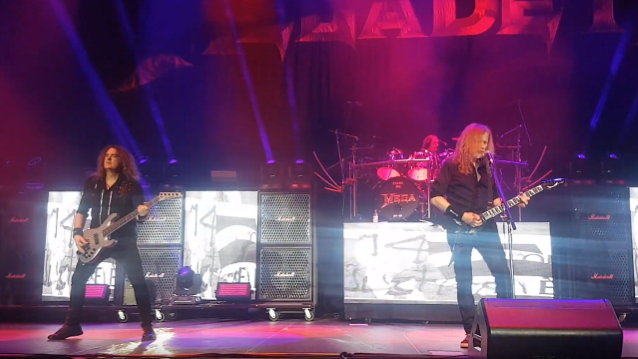 Earlier today, Ellefson shared a picture of the Hartwell Arena show on Facebook and included the following message: "This is a photo from tonight's tour kick off show in Helsinki, one filled with overwhelming gratitude from the four of us for the return of Dave's health, and the privilege for us to perform for you again. The reality and weight of what hung in the balance during Dave's cancer treatments these last months really shone through during the Q&A at the pre-show VIP meet n greet and in each song we performed on that stage. Life is a gift & our health is precious. Thank you for all the prayers and support to Dave and the @megadeth camp these past months....they surely worked! We are blessed to celebrate this new decade on a sold out tour across Europe! Hope to see you there. Godspeed.... #5fdp #megadeth #badwolves (Photo by @rockaroundtblog)"

Mustaine and his bandmates played an 11-song set which included such favorites as "Hangar 18", "Peace Sells" and "Symphony Of Destruction".

MEGADETH's tour with FIVE FINGER DEATH PUNCH and BAD WOLVES will visit 13 more European countries before ending on February 20 at the Budapest Sportarena in Budapest, Hungary.

MEGADETH has been working on its 16th album, which Ellefson said is due out early next year.

This is a photo from tonight's tour kick off show in Helsinki, one filled with overwhelming gratitude from the four of...