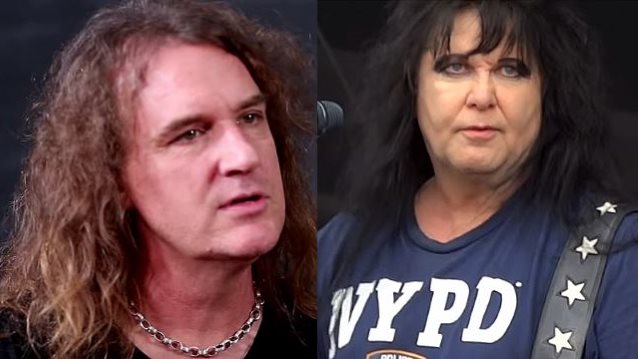 On November 12, Rock 'N' Load conducted an interview with MEGADETH bassist David Ellefson. You can now listen to the chat in the YouTube clip below. A couple of excerpts follow (transcribed by BLABBERMOUTH.NET).

On a possible conflict between being the bassist for a secular metal band and a Christian:

"Thrash was never an occult-based kind of music. I mean, we had some songs — you know, 'The Conjuring', 'Bad Omen', some stuff from our early records — but it's, like, MEGADETH has been a band that always writes about… Our music is almost like soundtrack music. We take a concept and we flush out a storyline from it. Even 'Looking Down The Cross' is essentially from hanging on the cross, looking down the cross. It's not a sacrilegious… We've not had sacrilegious music, whereas a lot of people back in the early '80s… And I think with Ronnie Dio in [BLACK] SABBATH, [their music] scared people. And it's part of what we loved about them; it scared us, so we dove into it.

"You know, we have never encouraged anyone to delve into the occult or any of that kind of stuff; we've never really had a position on it. But, you know, for me, with the ministry thing [Editor's note: Ellefson presides over MEGA Life! Ministries, a foundation that reaches hundreds of churchgoers every week]… I've also seen a great opportunity to sort of reach out and kind of be a voice to help a lot of… You know, there's a lot of broken, hurt people in the world, and a lot of broken, hurt people get into rock and roll, 'cause they think, 'Well, no one else understands me anywhere else. At least in rock and roll I can just be in a world where no one's gonna hassle me. Well, I've actually had a lot of opportunity to kind of minister and help people that have come to me. And through just listening to people share their story, and I've been very open with my story, with my autobiography, 'My Life With Deth', and so I think… It's funny — between the ministry and my autobiography, it's provided a really platform to be able to just share my life with people and help."

On whether he can see MEGADETH ever making a religion-themed album, like W.A.S.P. did with its latest effort, "Golgotha":

"No, I don't… Look, I think Blackie's [Lawless, W.A.S.P. mainman] [spiritual] conversion is great. We've done quite a few shows with him over the last bunch of years, and knowing from where he came from, where he is — as I understand, his father was a Baptist minister — I think it's awesome. I mean, he's got a tough catalogue to pick songs from, if he's gonna make that conversion. You know what I mean? 'Cause he, more than most, really had it out there, or pushed the songtitles out there.

"MEGADETH is not… We're not a religious band. We're not on a religious tirade. We're not here to somehow just blatantly share the gospel of Christ through the MEGADETH lyrics. I mean, STRYPER? Absolutely. They are. There's a lot of other groups…. RED… There's a bunch of other groups that are… They're very much, like, 'Look, we're a Christian band. This is what our mission is.' That's not what it is with MEGADETH. So inside this group, you can have whatever personal beliefs you may want."

On whether faith was a factor in Ellefson reuniting with MEGADETH mainman Dave Mustaine back in 2010:

"It was kind of interesting, with Dave and I, that this whole sort of faith-based thing sort of rose up to the top… It was a huge common ground for us to come back together on, for sure. I mean, big time.

"Look, even if you're not a religious person, and even if you have an antagonism toward a Christian belief, at least you can acknowledge that that was a platform for Dave and I to find common ground to become MEGADETH together again. So that right there, I think, if nothing else, is a good testimony that it works if you work it. [Laughs]"