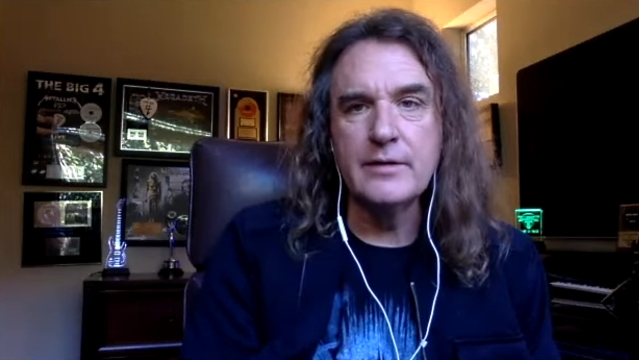 MEGADETH bassist David Ellefson spoke to the "Do You Know Jack?" podcast about how the advent of the Internet has changed the terrain of the music industry, particulary in an era when most music streaming services offer on-demand access to media where users can stream a song without having to download it.

"The music business, and especially with the Internet, boy, things change every six months — the speed at which it develops," Ellefson said (hear audio below). "The old formulas, of course, and the old guard of the music business, they were challenged in the '90s with Napster. That was the first time the evil horns of the Internet reared its head and said, 'Hey, we're going a different way.' And, of course, the old guard of the record business, who had gotten comfortable in their methodology, they got left behind. And the ones who adapted and got on board — obviously, Steve Jobs, largely, with Apple pretty much saved the day for an existing music business. But, obviously since iTunes, now we have Spotify and the digital streaming services and YouTube and all these things. The digital platforms, even for television… I watch [the Netflix show] 'Cobra Kai' [which follows the adult life of 'The Karate Kid' bully Johnny Lawrence 34 years after the events of the '80s film franchise]. Netflix had that afterplay party, and [actor] Ralph Macchio was even talking about that. He said, 'I've been approached a lot to do another 'Karate Kid' movie,' and he said it very well, and it goes to show — he's a seasoned actor; he's been in the business for many years — he said, he goes, 'Look, with the advent of these digital platforms now, we didn't have to go try to make some blockbuster movie. We can do this in an episodial series like this.'"

Ellefson also talked about how the pandemic has led to a surge of digital content consumption across genres and platforms, which is a very encouraging indicator for content creators and providers.

"God bless the digital platforms being here during the pandemic that we had some alternatives," he said. "Because the box office cinema, boy, that's gotten hit as hard as the concert business. And I think when all this stuff does come back online again, it's gonna look very different. Even the concert business, there's gonna be some social distancing and limited seating, and there's just gonna be some stuff we're gonna have to work around now. And they're saying, look, COVID is now here with us forever. Hopefully we'll get ahead of it and be able to manage it better than what we've done in the last year or so. But, look, it's here. It's kind of like the flu — it's here now. So it's gonna be something we're gonna have to be paying attention to, and hopefully it doesn't keep rearing its head like it has, but if it does, all of these big large gatherings and things, they're the first thing that's gonna be affected. And that affects all of our lives, those of us who are live performers.

"For me, I think books, movies, digital platforms — that is the path forward," he added.

MEGADETH is continuing to record its 16th studio album for a tentative late 2021 or early 2022 release.

MEGADETH's current lineup is rounded out by founding guitarist/vocalist Dave Mustaine and 46-year-old Belgian-born-and-now-Los-Angeles-based drummer Dirk Verbeuren, who had played with SOILWORK for more than a decade before joining MEGADETH.